18 Holes: What Were They Thinking!

Another Saturday rolls around at your local club. They always start with such high hopes as you jump into the car with a spring in your step.

Never mind that you haven’t touched a club since last Saturday, or perhaps the weekend before. We always set off with only ‘Tour quality’ form as our mindset and minimal expectations. 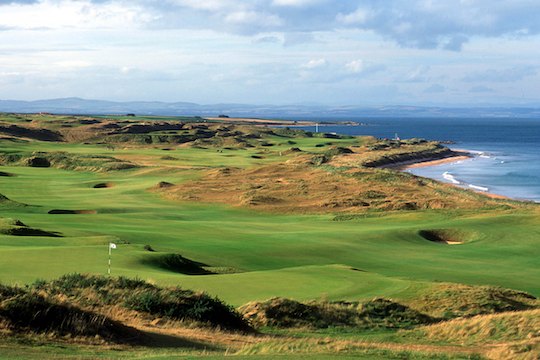 18 Holes: What were they thinking!

However, most Saturdays end in Groundhog Day-like familiarity, certainly for me anyway! Mediocrity salvaged by a late collapse after a promising start, the clubs then carelessly tossed back into place in the garage, the dog kicked and a look on the face that tells the family there’s no need to ask how you went.

Wherever you are, paying your green fees in dollars, drachmas, dirhams or dinars, this would sound like a familiar tale.

After my latest Saturday experience where my lofty expectations were dashed again, I was part way through the ritual of kicking myself for my latest stupidity when a question from left field popped into my head.

What possessed the Scotsman, way back when, to set up 18 holes on the rabbit infested, sandy seafront land we now know as the Old Course at St Andrews, generally regarded as the first course and a blueprint for golf courses the world over? ‘Why did he do it?’ In fact, ‘What was he thinking?’

For the sake of the exercise, let’s call our old Scotsman: Jock. Did old Jock get that much pleasure beating rocks with sticks for half the day?

After all, it can’t have been a 4 hour round back then with those implements; surely it was 6 or 7?

It’s probably all relative but I’m not sure in these formative days of the game that the sight and sound of a crisply hit stone or pile of dung could compare to the pleasure of a well compressed Titleist that arches skyward and brings us back for more next week.

Was it too much of the whisky at play? Was Jock being paid by the hour as a sheep herder, so the more time out on the links, the better?

Was his marriage on the rocks and he preferred the solace of the often feisty Fyfeshire weather to the feisty reception at home?

Whatever his thought processes, Jock’s decision has had profound implications on the generations of us that have trodden fairways ever since. Imagine if our unwitting hero had only placed 14 flags out there and golf courses now were only 14 holes long?

For starters, my late collapses ‘might’ be a thing of the past and therefore, the dog a lot happier! We’d all be a lot fresher and more content at the end of our rounds, we’d have more time to support and enjoy the facilities of our club (the 15th hole!) and still be home earlier to our loved ones.

We’d have fewer complaints about how long it takes for a round. Marriages would be saved, our nerves would be less frayed, lawns would be mowed and fences mended!

Think of the classic late collapses we would not have had to wince through over the years: Arnold Palmer blowing a huge lead in the ’66 US Open, Ed Sneed doing likewise in the ’79 Masters, Norman again in the ’96 Masters and of course, Jean Van De Velde in the ’99 British Open, although he only started digging his own grave with his 2nd shot on 18 (A 17½ hole course perhaps?).

Courses would obviously require less land, which would upset only real estate agents who sell course frontage while pleasing the environmental lobby no end.

Our green staff would be able to sleep in an extra half hour too! Courses would require less construction and maintenance costs and we would have room for more of them, to add more variety of choice. Lower costs surely correspond to cheaper memberships and green fee prices too.

What could all this mean for playing numbers worldwide? I’d say they’d be through the roof!

Maybe there is a market for a 14 hole course. Cricket has traditional Test matches, One Day and Twenty 20 versions of the game now to appeal to all ages and sensibilities.

Golf has its pitch and putt and Par 3 courses here and there but personally, I find they leave you unsatisfied. No opportunities to get the driver out and have a lash. Have a think about it, developers!

Of course, many would be of the opinion that old Jock got it just right, and all those dramatic collapses mentioned earlier are as integral to the lore of the game as the late surges to victory.

We’d have missed Tom Watson’s chip in on 17 in the ’82 US Open, Constantino Rocca holing that monster from the Valley of Sin on 18 at St Andrews to set up a British Open playoff, Karrie Webb holing out for eagle on the last to win the Nabisco in ’06 – the list goes on.

We all might have much better scores over a 14 hole version but the traditionalists in us crave success over the longer version, do we not? Finishing off a good round over 18 for us amateurs in particular, are highlights of our year.

So in summary: Let’s raise our glasses to Jock, for shaping the game as we know and love it, albeit there could have been opportunities lost by his decision.

Let’s be quick to hoist our glasses to him again though – this time in gratitude, for not having had the urge to round it up to an even 20!