Dressed to the nines in plus fours, flat cap and bow tie, Wynnum Golf Club pennants player Alan Grieve pleads innocent when accused of being an attention seeker or a lair.

“I am a fan of the classic days of golf,” says the reigning US Hickory Open champion. 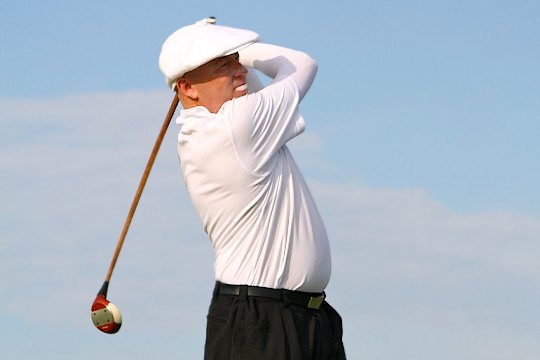 Alan Grieve tees off at the 2011 US Hickory Open

“I have a new-found passion for hickory clubs and for playing golf with them. I am definitely old school, and to dress accordingly is to play the part properly.”

And to say the 40-year-old draftsman has made a great fist of his relatively new pastime is an understatement. He had been playing hickory clubs for only 18 months when he blitzed the field by five shots to win the prestigious US event.

The tournament was played on the historic Donald Ross course at French Lick Resort, Indiana, last July. He shot successive rounds of 75 – five over – in oppressive heat to beat the record field.

“It was a fantastic experience on a magnificent golf course – unforgettable in fact,” he said.

“The 1924 US PGA championship was played at the same venue and the course was set up as close to that as was possible in respect of the tees, the pin placements and the rough. And, as they were almost 70 years ago, half a dozen of the greens were actually square.”

“It was only the fourth US Hickory Open to be staged, so I felt really proud – and honoured – to win. I was the only player outside the US and Canada to compete.”

Grieve will be back at French Lick in July this year to defend and 12 months on says he should be better versed in the intricacies of hickory golf. The event last year was only the second tournament he had played.

His fascination with the game developed from a Calamity Jane hickory putter which he has used for the past 20 years.  ”I felt I wanted to change my game and give myself a new challenge,” said the Wynnum four marker whose handicap blows out to seven when he plays with his hickory clubs.

“I just love playing hickory clubs. When I hit a good shot I really know it. The feel is so pure, unlike modern day clubs.”

After buying an introductory hickory set online from a manufacturer at Louisville Golf in Kentucky, Grieve has gradually built a playing set of 11 clubs, some reproductions, some authentic. He carries them in a genuine ‘little canvas bag’.

“And the clubs are named, not numbered,” he says.

“For instance a wedge is a niblick, a mid-iron a mashie, a three wood a spoon and a five wood is called a cleek. On average I hit them about 20% less in distance than a modern golf club.”

When he plays pennant golf for Wynnum, Grieve uses his modern tools of trade, but otherwise plays with his hickory set. And he dresses accordingly, even if it is a normal Saturday afternoon comp round at Wynnum.

After the US Open, his next major hickory tournament will be the Australian championships at Sydney’s Carnarvon Golf Club in November. He has finished third and fifth in the past two national titles.

But there will be more tournaments down the track if he has his way. He has recently become a member of the Queensland branch of the Australian Golf Heritage Society and their inaugural event and meeting was played at Royal Queensland in February.

“We had eight members play but I have no doubt our membership, and our future events, will grow,” Grieve confidently predicts.