Are caddies on borrowed time?

Let me open by admitting I have a pretty poor record as a caddie.

My 20-year-old son, Chris is only the second player of any type – and the first amateur that I have ever caddied for. 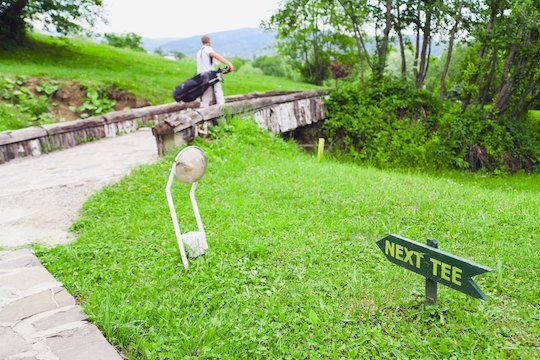 Are caddies on borrowed time?

And halfway around, with my man trailing by one or two holes he actually sacked me.

“Dad, I’d rather carry my own bag – thanks for coming and thanks for your support – but I’ll do better on my own,” was his frank admission as I was relegated to team photographer in the final of our club’s handicap matchplay competition.

The day did have a happy conclusion when he did indeed fight back and win his match.

We all went home happy that day although I suspected my days as a caddie were obviously marked “never to loop again”.

My first excursion into the world of the caddie took place in the Australian Ladies Masters about 20 years ago when I caddied for a friend of mine, Fayette Purser, for the first two days of the event.

‘We’ missed the cut but after the first day I actually suggested she try another putter, “because this one ain’t working any magic”.

The next day she opted for a Scotty Cameron and apart from dropping her putter cover on one of the par-fives and having to run all the way back to get it, with the crowd cheering me all the way there and back, our display on the greens wasn’t enough to write home about and we had the weekend off.

So it was with some trepidation that I returned to action for Chris at our home club and his matchplay final.

And let me tell you, the tension was electric – you could have cut the air with a knife – and that was only between Chris and me.

When he hit a bad shot I felt like shaking him – and he probably felt like choking me.

He took absolutely no notice of my suggestions, yet still probably blamed me for every bad shot – an accusation I know he will deny.

Yet he paid me the ultimate compliment the other night when we were discussing Steve Williams’ efforts with Adam Scott since he was sacked by Tiger Woods.

“Who would you choose to be your caddy, Dad?” he asked.

I thought about it for a while and came out with ‘I think I’d opt for Fluff Cowan.’

He then named me, alongside three others, that he would choose to carry his bag.

So even though I had been axed he had obviously mended that bridge between us. And I was secretly delighted.

Which brings me to the point of this column.

Having just returned from playing some golf in Europe I found the best caddie of them all was one of those GPS jobs that tells you the exact distance to the flag.

My use of it disgusted my rivals – but ultimately was my ace in the deck as I actually won more matches than I lost, for a change.

I think caddies are pretty poorly treated most of the time.

And frankly the disdainful way some players talk to their caddies does absolutely zilch for me.

Good luck to Steve Williams for speaking out about the way Tiger Woods sacked him and for enjoying his new-found partner Adam Scott and guiding him to victory.

But are caddies a dying ‘race’?

When I was but a lad, a few friends and I used to go and act as caddies for players at a private course in Sydney’s north. And we thought we were well-paid for our efforts.

But would there be one club in Sydney, or anywhere else for that matter, where you could find a strong and able lad (or lassie) willing to carry your clubs for 18 holes to earn a few quid spending money these days?

You know something? I’ve got a gut feeling they are.

And as I explained to my son – I’m no good to caddy for you. I bleat when you lose and cry when you win.

And who wants someone like that as your No.1 supporter?