The two-DVD set features 57 chapters containing more than 250 specific tips, totalling over four hours of instruction from the man voted #1 in Golf Digest’s annual ranking of America’s Best Teachers for the past 11 consecutive years. 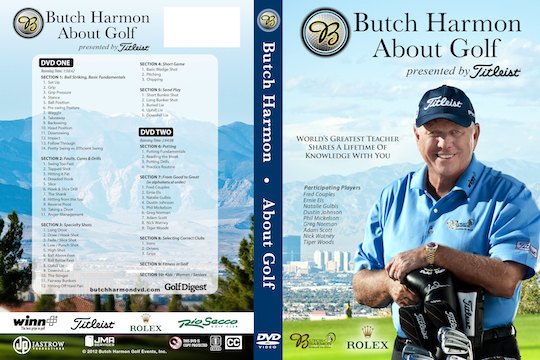 “Over the past 40+ years I have been blessed to work with some of the greatest players in the game: Phil, Ernie, Greg, Tiger, Seve, Freddie, and several up and coming players, such as Adam, Nick, and Dustin, who are destined to carve their names in the golf record books,” says Harmon.

Those players who have worked with Harmon all agree that the keys to his success are his keen eye for the strengths and weaknesses of each individual player’s swing; his comprehensive understanding of the game; his ability to communicate with the golfer; his toughness; his enthusiasm for his players to succeed; and his relationship and rapport with his players, making their work about teamwork rather than individual accomplishment.

The “Butch Harmon About Golf presented by Titleist” DVD set is sponsored by Titleist, Winn Grips, Rolex, Golf Digest and JMA and is available for US$79.95 online at www.butchharmondvd.com