Returning from PGA duties at the US Masters, Butterly said TV ratings would be bolstered by more players with outgoing personalities. 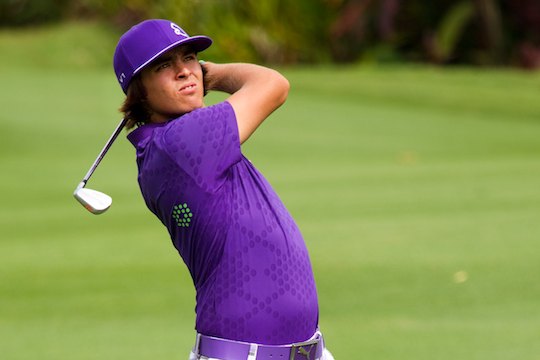 “If a player’s got a comment about something he wants to get off his chest, like Greg Norman and Robert Allenby’s another one, I think having opinions is good because players need to have their opinions.”

Butterly said overseas stars are setting the tone for how to garner fans.

“I’d classify (Sergio Garcia) as having a great personality. Bubba Watson, a guy who’s taught himself how to swing the golf club and hits it a country mile. Rickie Fowler, the way he dresses is quite wild.”

Butterly said James Nitties has set a good example as an alternative personality but said despite suggestions players such as Marc Leishman could be more marketable, there is little that can be done to change players.”

“It’s hard to tell someone that ‘you need to show a little bit more emotion,” he said.

“You saw when Jason Day won his tournament he was leaping into the arms of his caddy and we love to see that sort of thing. On one of the last holes he hit a ball in the water and he was crouching down in the middle of the fairway with his head in his hands. Those sort of things are great on television and you sort of ride with the player and with his emotions.”

According to Butterly, Day’s second place finish at Augusta alongside fellow Queenslander Adam Scott, is the best way to promote the game to Australia’s youth.

“If they’re contending and they’ve got their heads on television, it’s self-perpetuating really. With the guys not at home as much, they can still become household names because they’re on the TV every week if they’re playing well,” Butterly said.

The Masters fan experience confirmed to Butterly that our biggest events would be aided by larger budgets but said the PGA-run Australian PGA Championship at Coolum is a fantastic product.

“The amount of money that they are able to spend on facilities for the spectators is just phenomenal,” he said.

“The things that the Masters do very well (are) there are food and beverage stands, they’re permanent buildings. They sit there for 51 weeks of the year and don’t get used.”

The rotating nature of Australia’s major venues would make building permanent structures non-feasible according to Butterly.

“The South Africans are a big goal for us. They traditionally love coming down and playing on the Australian courses,” he said.

Butterly said securing American players for Coolum could be more complicated because it will coincide with Thanksgiving in the US.

“It’s a week that a lot of Americans take off and like to spend with their families at home.”

But Butterly said Coolum can accommodate any reluctant Americans.

“It’s a very relaxing week. The players can stay on site, they bring their family. If they’re not on the golf course they can sit by the pool.”

The PGA remains sceptical it can secure all the big name Aussies for the PGA and Open.

“They play an extremely long season, whether it be in the US, in Europe or wherever they are. It’s an absolute testament to them that they come down and continue to play here.”

Discussions are ongoing with Robert Allenby, who has not played in the Australian Open since he was upset by a spectator at the 2008 tournament, while Jason Day who has not come home to play in Australia in recent years.

“The last couple of years Jason’s had a few different circumstances where he’s been injured and he got married as well, which unfortunately prevented him from coming over,” Butterly said.

“He is very much aware of the want and expectation of the golfing public over here (for him) to come and play. He hasn’t identified any particular events yet but he certainly has expressed an interest in coming down and playing.”