Come on Dad, it’s your shot

For most of us, having a game of golf with your son is as good as it gets.

So it is hardly surprising that a European company has launched a Father And Son Golf Championship, which is proving a massive hit with many golfers from around the world. 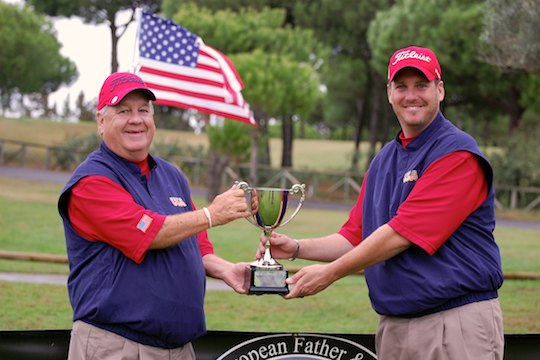 Even more exciting is the news that Australia and now South Africa have followed suit in organising their own events.

Australia’s Father and Son champions in 2010, George and Ben Matheson were invited to play in the 2010 European Father and Son Championships – and they had a ball.

Now Andrew and Dylan Marsh from Cabramatta Golf Club in Sydney are set to follow suit after taking out the title for 2011 at the Country Club in Launceston, Tasmania.

So the Marshes, who scored 137 stableford points to win the event, will head for the Costa de la Luz in Spain in October, 2011 in an effort to do us proud.

The Mathesons were quick to point out that they had the time of their lives over there last year and the Marshes were certain to have an experience to remember.

Certainly if they were unable to attend you would have no problem urging runners-up Ian and Clayton Brown of Launceston or Hobart’s third placegetters Paul and Alan McCann to step into the breach.

The tournament, which takes place at the El Rompido Golf Resort in Spain from October 24-29th is designed to encourage families to come together and play golf and have a bit of fun without taking it too seriously.

So don’t expect to see Craig and Kevin Stadler, Jay and Bill Haas or even Greg and Gregory Norman competing. Well, their names were not among the early entries – at least not this time.

The format for The European Father and Son Golf Championship is a 54-hole better-ball stableford played off three-quarters handicap, with scratch and handicap prizes.

The tournament is unique as it actually is open to both professional and amateur golfers with no age restrictions.

The golf pros play off scratch and there is a maximum handicap allowance of 24 for amateur competitors, who must hold an official handicap.

The overall winning scratch and handicap pairs receive a return holiday invitation to defend their title in the tournament the following year as well as amazing golf prizes from the championship sponsors.

Now in its fourth year, the European Father and Son Golf Championship attracts a strong international field of competitors and is even televised on Sky Sports.

Thanks to the growing reputation of the Father and Son Golf Championship around the world, the European Championship also has reciprocal agreements with the USA, Australia and South Africa, which means the European winners get a free invitation to these global championships and vice versa.

“Playing with your son is just one part of it,” said Gary Carpenter after their victory.

“I am just stunned at the camaraderie, the friendliness and friendship of the people we have met and the way we have been received and treated in Europe.”

The 2010 scratch winners, PGA professionals Michael and John Pickford, collected the winner’s cup and a trip of the lifetime to the USA to represent Europe in the American Father and Son Championship in South Carolina, USA.

“This is the best event I have ever played in,” said John Pickford.

“Words cannot describe how great it is to play with your dad and to win is unbelievable.

“Mum also walked the course with us all week which made it really special – a real family effort.”

Golf professionals, club secretaries, head bar stewards and green keepers can enter for the special discounted price of €658 ($A895), while past competitors of the European Father and Son Golf Championship, current club captains and junior organisers can also enjoy the same discount.

“The idea behind the European Father and Son Golf Championship was to create a fun event that is accessible to all,” tournament director and PGA professional Toby Marsden told The Golfer Monthly.

“By opening the entry to professionals and amateurs of all ages we hope that father and son partnerships from every aspect of golf, from the hard-working green keeper to the avid club player, will be encouraged to take part.”

Further information about the European Father and Son Golf Championship can be found on the website – www.fatherandsongolf.co.uk

The prize includes five night’s accommodation, dinner, B & B, transfers and four rounds of golf. Flights are not included.