Fitness For The Fairways

When it comes to improving their game, many golfers think it’s all about honing technique and skills.

They work on their grip, swing, tempo, they practice in the bunkers, practice on the greens, take trips to the driving range. It’s a merry-go-round of self improvement. 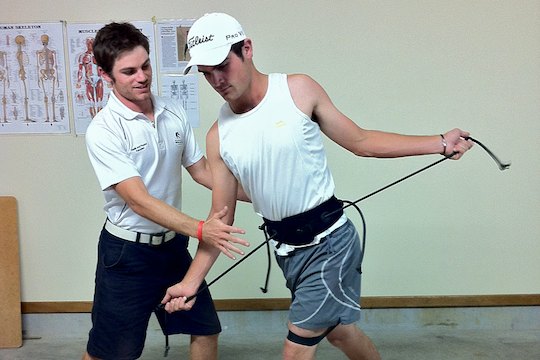 The 24-year-old physical education graduate reckons that golfing fitness is one of the most overlooked essential elements of the game.

“When a golfer wants to improve his game he thinks equipment first, technique second and then fitness a long way behind,” said Chris.

“A lot of club golfers have office jobs. They’re leaning over a computer, have rounded shoulders, rounded backs and that creates floors in the golf swing. It’s going to restrict the turn and affect the club path as well.

“They go to a golf coach who shows them proper technique, but that can only get you as far as your body can respond. If your body can’t do what the golf pro is asking from it, you won’t improve.”

Chris reckons the only answer is to put a correction exercise program in place to help the body do what you’re asking of it.

“Most amateur golfers have poor mobility through the hips, poor spinal flexibility and weakness through the core,” he said.

“Even among the most unfit, a few hip stretches and resistance band work might be all that’s needed to lift the game.

“Anything that stretches the legs and hip, or a few torso rotations will help. And if nothing else, I would recommend regular walks off the golf course, because general fitness helps the mind function better and you’ll make better golfing decisions.”

Not only has Chris applied this theory to his own game, which has seen him take out the NSW Country amateur championship in 2010, Newcastle District Championship and three of the last four club championships at his Belmont Golf Club base, but he’s now crunching the numbers in the final stages of a research masters degree on the effects of golf-specific strengthening and conditioning on the performance of juniors.

“I’ve noticed kids’ posture is getting worse and worse with the rise of Facebook and texting and time spent at computers. Kids aren’t outside enough,” said Chris.

He’s been working with promising Newcastle juniors to improve their fitness, encouraging daily drills to activate muscles and set up good posture.

“I’m just trying to get to them early on, and hopefully as they grow into the professional ranks they already have those fitness skills,” he added.

Chris has also been working with his brother, Brendan, who last year turned professional and recently took out the Australian 4Ball Championship.

He’s toyed with a professional golfing career himself but is leaning more towards a long-term role in golf fitness training which has already seen him take on a string of clients.

“Too many older golfers are concentrating on keeping their handicap low, when they should be focused on longevity in the game. They should be protecting against golfing injuries like lower back and shoulder problems. If you want to keep playing into old age, you have to stay fit enough to walk the course,” warns Chris.

“If you want more consistency in golf it helps to be fit.”