Is the victory leap really worth it?

New French Open champion Thomas Levet and his jubilant manager had been advised not to jump into the water hazard guarding the green at the National course in Versailles.

Levet is one of the most colourful characters on the European Tour and to see him capture his own national open for a first time saw his fellow Parisians cheering themselves hoarse. 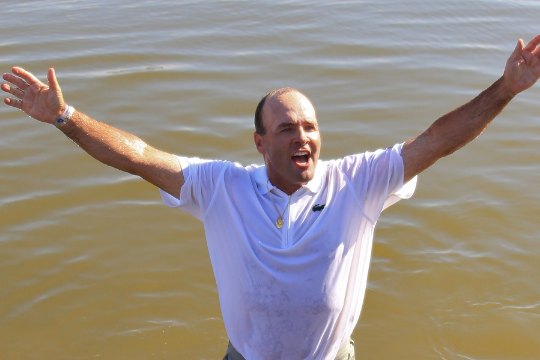 But Levet’s celebration turned sour when an x-ray the next day revealed he had broken a bone in his leg.

Levet’s victory leap proved very costly as it meant having to forgo a start in the British Open with his victory on the 2018 Ryder Cup host venue ensuring him a Royal St George’s tee time.

Three years earlier, Spain’s Pablo Larazabal had dived head long into the waist high water and could count himself lucky not to do himself serious injury.

Levet’s freakiest accident brought into question the practice of celebration success by jumping into water hazards.

It’s a long-time practice on the LPGA Tour while in recent times in Europe we’ve seen Ireland’s Paul McGinley jump into the hazard alongside the 18th green at The Belfry after he holed the winning putt to deliver Europe victory in the 2002 Ryder Cup.

Spain’s Gonzalo Fernandez-Castano jumped into the similar hazard in capturing the 2008 British Masters and emerged uninjured.

There’s really nothing any Tour can to other than to advise its competitors of the serious risk to injury.

However, on a lighter note there’s the story of colourful American Bryan Saltus.

Saltus was walking up the final hole of the Johnnie Walker Vietnam Open assured of a first Asian Tour victory.

Water lay all the way up the side of the 18th and Saltus, who always wanted to celebrate a win by jumping into a hazard, was wondering how deep was the hazard.

When the American jumped he went right under such was the depth of the hazard.

Saltus is one of the most popular players competing on the Asian Tour and there was a time when he competed in the first co-sanctioned Hong Kong Open.

He had produced a low first round and on being interviewed by those who worked on the European Tour, Saltus was quizzed if he had ever played golf in Europe.

His response was pure Saltus.

“I’ve been to Amsterdam but not to play golf,” he said.

“I was invited to be the judge in a marijuana smoking contest!”