But when you go there for a holiday, you have to admit that dreams of a round of golf on one of the world’s great courses does kind of bubble to the surface. 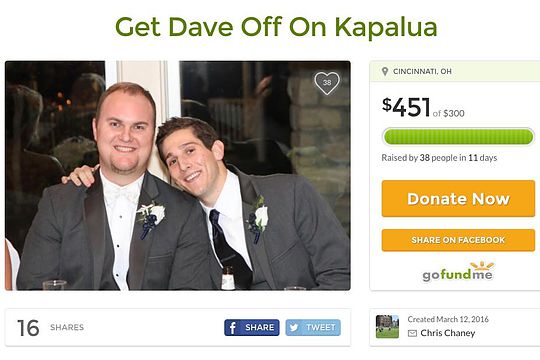 But one American golfer heading there for a holiday was told in no uncertain terms that golf, at Kapalua, in this case, was definitely “off the table”.

Simply, his partner suggested that $300 a throw was just too much for them to be paying for one round of golf.

Enter a good, actually very good, friend named Chris Chaney who simply took it to heart and took it upon himself to start a GoFundMe campaign to get his mate Dave a game of golf at Kapalua, one of Hawaii’s supreme layouts.

The amazing part about all of this is, it worked.

Dave’s plight to play Kapalua struck a chord with many, obviously golf nuts, who were more than happy to open up their wallets so that a guy they had never met or would probably never meet, could go play golf while on holidays in Hawaii.

They raised enough money that Kapalua came to the party, so to speak, and even offered to throw in lunch for the couple and some golf gear “on the house” to make his golf day a memorable one.

Incidentally Chris, I’ve always wanted to have a game of golf at Pebble Beach but my partner has, so far, baulked at the thought of paying upwards of $US500 for a game, despite my protestations that it is one of the world’s great golf courses.

And she doesn’t know the half of it, I’d probably have to hire clubs, a caddy and maybe even find a partner who wants to play it alongside me.

Over to you Chris! I’ve packed the golf shoes and I’m ready for the call-up.