It’s not known why Ortiz-Patino is giving up his collection to auction but one thing is certain and that is it should fetch over US$3 million when auctioned by Christie’s in London on May 30. 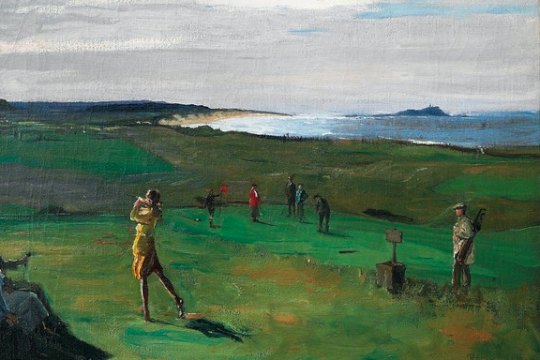 And before the auction, many items will be put on show in Dubai, Hong Kong and New York.

Some of Ortiz-Patino’s stand out items include a putter used by ‘Old’ Tom Morris and son ‘Young’ Tom Morris that could generate US$500,000.

A painting entitled ‘The Golf Course, North Berwick’ and painted by Sir John Lavery in the 1920s, is expected to make US$480,000 in the sale.

The painting is part of a collection painted by Lavery at the course in 1921 and 1922, another of which sits in the Tate Britain gallery in London.

Christie’s describes Lavery’s paintings of North Berwick as “the most valuable and desirable modern depictions of the game”.

Studies of the painting indicate the golfer pictured is teeing off at the 5th hole and the green to the right is the par-3 4th hole.

Ortiz-Patino has built up his collection over the past 25 years and it’s been on display in the clubhouse at Valderrama that hosted the 1999 Ryder Cup and many European Tour events including last year’s Andalucian Masters.

It numbers four hundred items including an array of vintage golf balls and clubs, one of which was owned by a founding member of the Old Course at St Andrews.

Some of the other sought-after items at the auction include the preparatory oil sketch for Charles Lees’ world-famous painting ‘The Golfers’, which is valued between £120,000 and £180,000.

And also up for auction is a programme from the inaugural Masters tournament in 1934, which is expected to fetch as much as £10,000.