Like the Formula One circus, the 500cc Grand Prix motor bike races, the ATP Tennis Tour or whatever sport it may be, Callaway Golf is committed to being present at every European Tour event to ensure the best for their contracted players.

And as Fatiha Betscher found out it means some Callaway reps are forced to send almost 200 days a year away from home, sleeping in more than 50 different hotels and, when in Europe proper, clocking-up some 30,000 miles travelling the length and breadth of Europe.

But if it means a Callaway staff player winning on any given week during the Race to Dubai then they deem it’s all worth it. 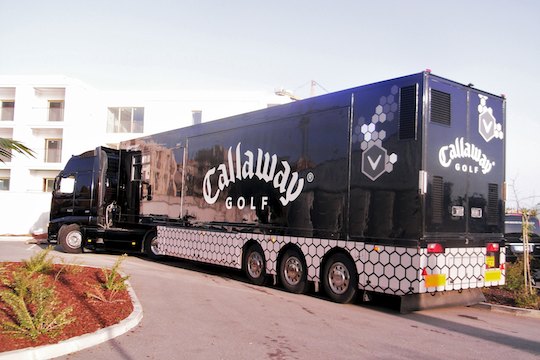 It’s October and the European Tour is on the sun-splashed Algarve for the Portugal Masters.

The event is one of the more prestigious tournaments of the season and has attracted an impressive field, including the Molinari Brothers, who starred in last year’s Ryder Cup.

South African Charl Schwartzel is in the field, but little would anyone know what he would achieve in April this year at the US Masters.

Joining him were Miguel Angel Jimenez, who has his red Ferrari parked in the car park along with his big-hitting compatriot, Alvaro Quiros who destroyed the Portugal field two years earlier.

It had been Quiros’ first full season on the Tour that year and he certainly delighted Callaway with the ease of his victory around the tough Oceanico Victoria course.

But on this occasion, it would be an Australian in Richard Green who reigned supreme, despite the ignominy of a final-hole bogey.

Like most events on the European Tour, it’s usually the equipment vans arriving at the golf course first. They’re usually there from Friday night having left the previous tournament on the Wednesday afternoon.

So for the 2010 Portugal Masters, the Callaway, Nike, TaylorMade and Titleist vans left the practice range on the New Course at St Andrews on Wednesday driving right to the south of England and Dover before crossing the English Channel and carrying on down through France and Spain before reaching the south-west corner of Portugal.

After the trucks have been set-up, they’re then joined by some four to five other colleagues on either Sunday night or Monday morning who’ve had the luxury of at least a few days at home with their respective families.

Paul Monks and Roger Cleveland in the Callaway Truck

Paul Monks is into his 10th year working with Callaway.

He’s one of two allocated drivers – but then Monks just doesn’t simply share the driving of the truck.

Once he’s at a tournament, he’s up to his elbows from Monday to Wednesday attending to every task from adjusting loft and lies to changing shafts and affixing new grips.

“When we travel from one event to the next throughout Europe we have to be conscious of truck-driving bans on weekends and bank holidays – and that’s very much the case all over Europe,” he said.

“We would arrive at an event usually on a Friday night where we would park the truck at the course go back to the hotel and then come back Saturday to wash the truck and get everything set up so we are ready to go Monday morning.

“On Monday the players all begin arriving from all over Europe and while Monday morning can be quite busy, we might have situations like Thomas Bjorn wanting another set of irons built for the event.

“You really can’t predict how the few days are going to pan out other than know you are going to be really busy.

“It’s only on Wednesday afternoon when everything begins to quieten down as we have attended to everyone and then it’s time to pack up the truck and head to the next event, which this year is at Castellon in Spain.

“I’ll drive the truck probably to Granada and then look around for a hotel where I can park the truck safely, though that in itself is interesting, especially if you have to stop at some little town in Spain.”

It’s easy to see why Monks is so passionate about his job.

But while he plays off a handicap of two and lives at Seven Oaks in England, Monks admits he’d be in serious trouble with the ‘missus’ if he were to come home and go out to play golf.

So nowadays he looks forward to snowboarding in the winter.

“So there’s a lot of players using at least one item of Callaway equipment and the flow of traffic in and out of the truck keeps us pretty busy,” said Monks.

Usually there’s about half-a-dozen Callaway’s Tour personnel at each tournament and they include two technicians – Monks and one other, two working the range – Ian Dryden and one other and two on the putting green – Sheamus Sweeney and one more.

The truck is off the road November, December and January when it’s back at base in the UK from where Callaway continues to use it as a workshop, even though there are workshops back at Callaway’s headquarters.

“We’ll work on say Cambo’s or Ernie’s wedges when we are back at base because they can take two to three hours to grind them,” he said.

“Besides it’s tough to undertake that sort of work at a tournament as we are working at a fast pace and there’s other Callaway players who might want drivers attended to in 15 minutes.”

And the best part of the job?

Well, that should be pretty easy to work out.

“But then I really can’t watch golf as I get far too nervous. I remember when Cambo won the US Open.”

“I just couldn’t watch it because it’s almost like they’re family and because you know the players so well you just don’t want anything to go wrong.”

“I’ve always been very nervous that way but then seeing Alvaro win here in Portugal two years ago was very special – and now look at the talent he’s developed into.”

“But I’m now just a few events away from travelling out on the Tour for this year and when I look back I’ve stayed in 56 hotels already this year.

And there’s enough golf balls for a month of tournaments – 20 players at four dozen balls per player that’s 80 dozen or 3,200 Callaway golf balls.