On Tour: An Aussie Plays Bethpage

I’ve never played in a United States Open or at a US Open course in tournament condition. But I now have a newfound respect for what the championship’s competitors must deal with each year.

Last month I went to Farmingdale in New York to see what all the fuss was about at Bethpage Black. 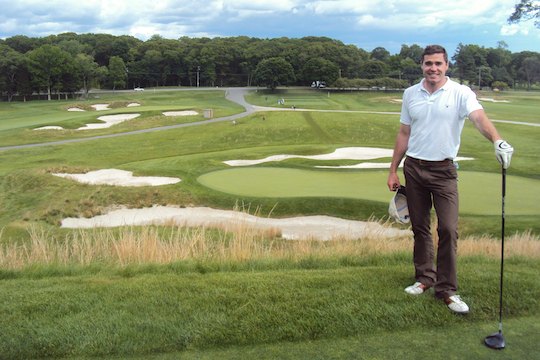 Twice a US Open venue and next month’s host to the PGA Tour Playoffs event, The Barclays, Bethpage’s reputation as a brute precedes it.

It’s the only course I can think of with a sign on the first tee warning players of the course’s impending difficulty but I can now attest it speaks truth.

Once a scratch golfer, I tested my mettle from the plates on every hole. A solitary birdie up the last gave me an 11 over par total on the 7,468 yard, par-71 beast.

I’ve shot worse scores but I walked away feeling as though I hadn’t played too badly. In fairness, my preparation was not that of a typical touring pro.

Teeing off just before midday, we rose at our Manhattan hotel room at 7am, taxied to a train station, stuffed in a couple of bagels on the run before a one-hour train ride east to the township of Bethpage.

From there we needed another short cab ride to the course. But the hassles weren’t over yet. 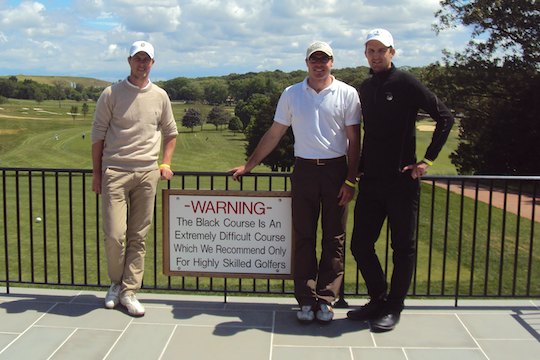 At Bethpage you don’t pay up in the pro shop – that’s done in a corridor next door where players speak to course employees in a booth behind a fibreglass window.

Forking over $135, I felt like I was at a bank or sorting out travel arrangements at a foreign consulate.

On this particular day, the Long Island Open was on the Red course at Bethpage and there were plenty of staff on hand to get green fee players through.

And that’s exactly the attitude of the place – to churn through golfers – to get them in and get them out.

Players must arrive at the course at least an hour before tee-off and be at the first tee 20 minutes beforehand or they run the risk of losing their spot.

After paying up with time to spare we were handed a docket. In my haste, I snatched it from the cashier and headed for the practice range.

Once we arrived at the first tee, the starter asked me to present the docket. Often less than mindful, I couldn’t find it.

Trying to barter with my driver’s licence and receipt of payment, the starter was adamant I couldn’t play without my docket.

I thought to myself, ‘this place must have plenty of fence-jumpers trying to sneak on the course if my ID and a receipt of payment won’t do the trick.’

But luckily I found my docket crumpled in my jacket pocket and I was good to go.

Still startled, I watched the starter dress down a golfer in the group ahead for pulling his buggy off the brick path beside the first tee and into the grass by the pristine tee box.

It was as though we were back at school – a fresh batch of year seven students marching single file into high school assembly.

But the real examination of patience was still to come.

The first hole offers players a sweeping view of several holes below. Sitting like an oasis amongst the meadows of long grass is a sliver of fairway.

It’s a reminder before you have even started that it’s going to be a long day.

While the fairways are narrow, everything else is big.

The bunkers are the largest I’ve seen and the course’s rough, greens, carries from tee to fairway and walks between holes aren’t small either.

The third, eighth and 17th holes are 230, 210 and 207 yards respectively and not one of them offers players the option of running the ball into the green.

While this would draw expletives from less adept players I found the challenge fascinating. After all, we had been warned of the course’s teeth from the outset.

Holing out on the 18th green, each member in our foursome had lost his battle with the course but added a string of knowledge to his bow.

From true links golf, to parkland golf and to the firm courses on the Melbourne sandbelt, golf comes in all shapes and sizes.

Bethpage is home to power golf. It’s a shame the professional game revolves almost entirely around power but playing it every once in a while is something worth doing.