Paul ‘Fatty’ Vautin in a league of his own

Imagine, if you can, the practice fairway at Royal Melbourne. It’s the first round of the Heineken Open, 2007.

Thousands of people have gathered to watch the warm ups of greats like Nick Faldo and Ernie Els. And there on the practice tee, right between Els and Jim Furyk, is a bloke in a pair of casual shorts, with a head of flaming red hair and a swing unlike anything seen at a professional event. 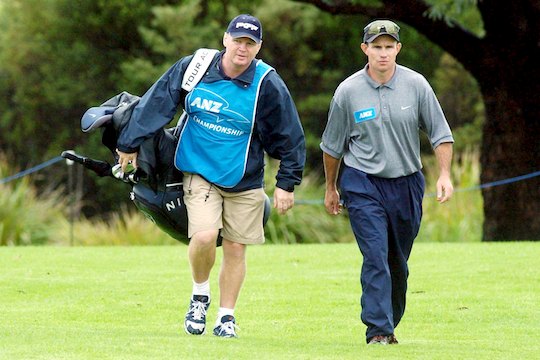 His face seems familiar but somehow he looks very much out of place in this heady, elite golfing company.

“I had said to my caddie, ‘Here, take the bag to the practice area while I run to the players’ room’”, recalls tour pro Paul Gow.

“When I walk out, there he is with my clubs hitting ball after ball! I couldn’t believe my eyes.”

“I was waiting and waiting for Gowsy to come back,” confesses the caddie.

“So I picked up a club and started hitting a few balls. Out of the corner of my eye, I could see both Els and Furyk looking at me a bit funny, then I hear this voice yell ‘What the (expletive) are you doing? You can’t hit balls here, you’re a caddie!’”

For Paul Gow, allowing his caddie onto the practice range could have meant a huge fine. But looking back, it was just one of the many funny moments he enjoyed when he broke with tradition and used his close mate, rugby league legend, The Footy Show host and funny man, Paul ‘Fatty’ Vautin as his bagman.

They teamed up for about 10 tournaments and both were stung by the criticism it drew at the time.

“I could have hired a professional caddie but Paul (Vautin) knows my game as well as anyone. He’s a good golfer and we played together all the time. I needed someone to keep me comfortable so he was there for a very good reason.”

And it wasn’t just Gow who enjoyed Vautin’s company on the tour. During the Australian Open that same year, American golfer, Rich Beem, collapsed with laughter and rolled around the 17th green when Gow’s celebrity caddie had an outbreak of flatulence just before Beem’s putt.

“Caddies are supposed to keep up and shut up. Fatty could do neither, but he always had everyone in stitches,” said Gow.

“What’s kosher for footballers might have seemed a bit out of place on the golf course but, to this day, Rich Beem still asks me to say ‘hi’ to my crazy Aussie caddie.”

Vautin may have been a ‘crazy’ caddie, but the former rugby league player, State of Origin coach, and host of Channel Nine’s Footy Show, is deadly serious about his golf.

“Golf is all consuming to me. I’m in love with the game. It’s different from team sports. It’s a game never won, a constant battle, but it’s also so enjoyable,” he told Golf Grinder.

His time spent as Paul Gow’s caddie taught him a lot about this own game but also brought home the quality of the players on tour.

“These guys are insane,” said Vautin.

“Honestly, you’ve got to be a weirdo to do that to yourself. I mean this is their bread and butter and one missed putt can be the difference between making the cut and going home. It would do my head in.”

Vautin says professional sportsmen, who are used to team sports, would struggle with the stresses of professional golf.

“It’s different when you can share the load with the team, or when you’ve got a coach who can take you aside and console you. These guys get very down on themselves when they don’t play well.”

Vautin discovered just how stressful professional golf can be when his own game had become refined enough for him to enter the NSW open. His first appearance turned into a nightmare when he froze on the very first tee.

“I heard my name called and I stood over the ball but I couldn’t take the club back. I just stood there. I couldn’t move at all. Then I heard Anthony Painter whisper ‘Just take it back, c’mon mate, just take it back’.”

Vautin went on to make an eight on the first hole. He pulled it together eventually, but the experience shook him.

“I certainly wasn’t expecting to win, but my reaction surprised me. I’d played football grand finals in front of thousands of people but there I was, shaking – completely out of my depth and I learned a lot out of it.”

The trauma of that experience paled into insignificance when, during the filming of The Footy Show in 2005, one of the comedy skits went horribly wrong and Vautin smashed his head into the concrete floor.

He was severely concussed and very ill for three months. His doctor told him to try to live life as normally as possible but when he attempted to play golf the severity of the injury hit home.

“When I went to take a swing I nearly fell over. I just couldn’t take a backswing at all. It took a long time to come back, nearly a year-and-a-half,” Vautin revealed.

“Paul Harrington, who retired after five concussions, said to me recently that nearly 80 per cent of people who’ve had severe concussion get dementia, so who knows what the future holds, but right now I’m back with a gusto.”

Despite what he thinks is an uncertain future, Vautin sounds like a happy man. He’s funny and self-effacing and his enthusiasm for this adopted sport seeps into every story he tells.

“It’s not just the game. It’s the camaraderie. I love being with my mates at Monash. I love a bet. There’s nothing like making a six-footer and knowing you’ve made $600 as well!”

Gow sums Paul ‘Fatty’ Vautin up this way: “Paul is a very good golfer and he’s always determined to get better. But when he hits a bad shot, his lip drops and his head mopes and he’s like a kid who has let himself down. He just loves it so much.”