Tee times they are a-changin’

I’ve only been chased off a golf course twice in my life. And I’m happy to report that both times it was by women.

I say this because I’m sure the majority of women are quite happy with the hours they are allotted for their weekly competitions. 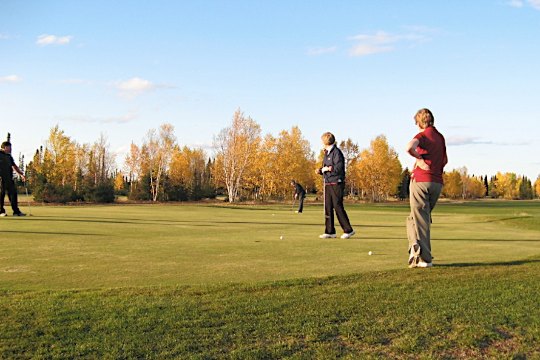 Tee times they are a-changin’

In other words, although they might like to be included in Saturday morning competitions, for instance, I’ll still bet pounds to peanuts they are not prepared to give up their Friday competition to let men invade their “domain”.

I arrived at a private Sydney club in Sydney’s north-west early one Friday morning (about 7.30am) and was told I couldn’t play until after three that afternoon because it was “ladies day”.

Now there were three cars in the car park and one of those belonged to the resident professional.

I asked if maybe my friend and I could just sneak off the back nine and play a quick nine.

“Not a chance champ, it’s women only until three,” he repeated.

Needless to say I headed to a public course nearby where we happily squeezed in a considerably slower 18 holes.

And I don’t mind admitting I am no longer a member or even a visitor to that private course. I thought when there was no-one waiting to hit off they could have been a little more, shall we say, flexible about letting us play.

The other time was my own local course and we played a quick nine very early one Friday morning and thought we might sneak in a couple more on the back nine when we suddenly noticed a group of women on the 10th tee waving us away.

“You can’t play here now, its ladies day,” I was quickly informed before being almost escorted from the course.

I have never attempted to “infringe” since then – the course is theirs and I guess we have no right to expect to play during their competitions.

The fact men often have Saturdays to themselves is a massive bane of contention at the moment, given a recent court case where a Sydney club was found guilty of sexual discrimination and ordered to change its tee times for female members.

That northern Sydney club allotted six hours for male players on a Saturday but less than half an hour for women to book tee times of a Sunday.

That is unfair but let’s not forget there are 70-80 per cent more men than women at many Sydney golf clubs.

I suppose that’s our fault too – but times have changed a lot in recent years.

Our club, for instance, will let women join the men’s competition of a Saturday although I don’t think they can actually win the whole day’s competition.

I have always maintained that if they pay the same amount of fees that we do then they should be allowed to play as often as we can.

And there has been the occasional Friday where I would have loved to tee up alongside the girls in their competition. But at this stage I cannot. And if I turn up and say I’m here to play in their competition, quite a few of them would happily send me home.

And I’ve got no problem with that.

These days if that is not possible every day of the week, I’d suggest the time is fast approaching when it will be.

“As long as they don’t slow me down and turn my five-hour round into a six-hour round,” said my regular Saturday partner.

“Because then they would have to answer to my wife.”

“And no-one, least of all me, wants to earn the wrath of that woman.”