When Network TEN newsreader Sandra Sully swings a golf club she describes it as a bit of a grind – literally.

Labral cartilage tears in both hip joints are enough to stop most golfers, but the gorgeous blond presenter is as physically and mentally tough as they come. 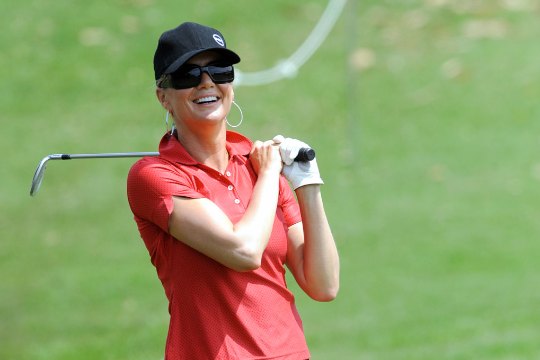 “I’ve always been a fitness fanatic then I nearly broke my ankle running about three or four years ago. When I got back into it I had a niggling problem with my foot so I finally went to a toe guru,” says Sandra.

“He took one look at me and suggested I see a knee and hip specialist, who diagnosed the trouble.”

There is no short term solution to Sandra’s chronic hip problem so she does what she’s always done when faced with a threat.

“I accept it and move on. It’s important I stay agile. You have to keep your mobility to live a long life, so I do what I can do within the limitations. I was a fitness Nazi. Now I’m not as fit as I was, but I swim in summer and the injury won’t keep me off the golf course.”

Sandra describes her life as serendipitous. She says she fell into news-reading almost by accident, but there are not many “accidental” newsreaders who hold down a senior network role for 20 years.

That’s how long the former Brisbane “daughter of a wharfie” has been telling us the late night news. Her melodic delivery and comforting presence have won her a hardcore legion of devoted fans.

Many have been with her since she started in that time slot.

Some have got a lot closer than she’d have liked. One, in particular, may have tested her strength but also proved her gritty determination.

It’s been well documented that Sandra survived a possible kidnap attempt 14 years ago, but she has never publicly discussed the details and the fallout of that incident until she spoke to Golf Grinder.

“I don’t believe in being a victim. I’ve dealt with it and I’ve got on with my life but it took five or six years to get over it,” she revealed.

For the record, the incident took place in 1997. Sandra was returning home from her late night job. She had just driven into a secure car park in her apartment block. As she opened her car door she was confronted by a man wearing a balaclava, and holding both a gun and handcuffs.

“Police think he was trying to kidnap me,” says Sandra with a little less assurance in her voice.

Sandra struggled to fight off her attacker. He struck her repeatedly across the head with his gun but little did he know that the petite television newswoman had more steel in her spine than he had patience.

“He held the gun to my head and tried to knock me out but I fought him off and screamed and screamed. What saved me was that the garage windows had bars but no glass and the apartments were within earshot.”

The fact that her attacker was never identified or found made the incident all the more traumatic.

“To this day I don’t know if he was a stalker or I was just a random victim,” she said.

“You recover in stages. First physically, then psychologically, then emotionally. It’s a journey that goes on and is never completely over.

“What extended the whole drama for me was that I got divorced not long after, which meant that I was home alone and still doing the late shift.”

It was her job that got the presenter through the ordeal, she says. That, and her friends who became her Sydney family.

“I had to learn to deal with it and move on, and eventually I was able to head down to Woolhara Golf Club by myself and play a nine-hole best ball, by playing two balls. It was solitary but safe and gave me great comfort.”

“I developed a much deeper appreciation of my family and friends and as much as I enjoy the glamorous trappings of my job, I realised I can’t take them with me. They’re an indulgence but not important.”

Sandra has had to move around with personal security for all those years since the attack because her high profile job means she’s always recognisable and always vulnerable.

It’s been a hard way to live, but there is sunshine on the horizon.

She told Golf Grinder that she has just become engaged to economist Symon Brewis-Weston and that’s she’s happy to be betrothed and in love.

The pair share a love of golf and have enjoyed regular jaunts to courses in New Zealand, Hawaii and mainland USA, but both are dogged by a lack of time.

“That’s the one thing the golfing industry has to come to terms with. People like Symon and me are time poor. I’m all for 12-hole events. Nine holes is not enough, but I never have time for 18 holes,” says Sandra, who learned to play golf at school.

What Sandra Sully does have time for is smelling the roses and making the most of what life hands her.

And if that means swinging the golf club with squeaky joints then so be it. They’re attached to a backbone of solid iron.