Let’s face it, Donald Trump gets so much publicity for the game that it has to be said that he is good for golf.

What he has done to some golf courses around the world is, well, awesome. 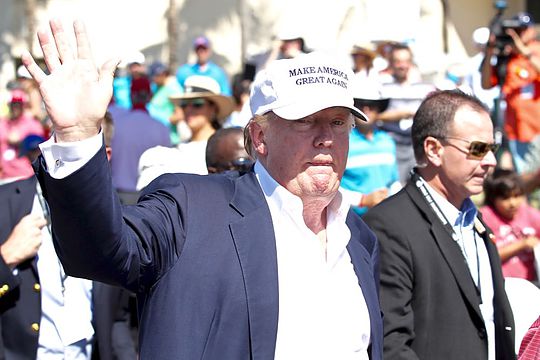 Yet the tales of what a distraction he has also been, at times, are only now bubbling to the surface as ‘The Donald’ continues his charge at the US Presidency.

One of those occurred as far back as 15 years ago and involved our own Karrie Webb.

It seems the final event of the LPGA Tour for the year was being played at Trump International in West Palm Beach, Florida.

In the second round, Webb smacked a tee shot on the par-three seventh that was short of the green and was bound for the water when some light rough did a “Fred Couples” and somehow held it up on the bank.

Trump, who thinks golf isn’t great unless it’s hard, made the comment that while Webb was a great player, the shot should have gone in the water.

That night Trump’s’ maintenance staff shaved the banks so severely that green spray paint was used to cover a few splotches of bare dirt.

Another ripper occurred a couple of years ago at Doral when former world No 1 Rory McIlroy hit a four-iron into the par-three ninth hole during a practice round.

McIlroy was then asked to hold his position.

Turns out Trump was getting ready to leave and his helicopter was parked near the walkway to the green.

Ever the good sport, McIlroy merely waited and smiled as the chopper took off with the accompanying roar of rotors and gusts of wind.

That was only a practice round.

Apparently Trump and his chopper caused a bigger stir when they had players backing off shots at Turnberry in the first round of the Women’s British Open last year.

While the future of the event he hosts at Doral may be open to conjecture, there’s no doubt he’s continue to pull publicity where ever he goes and his courses may be the best – but he’s happy to remind everyone that he owns the very grounds they are walking on, as well.