While Australia continues to dine out on Royal Melbourne, Barnbougle Dunes and, more recently, Lost Farm being our greatest courses and rated in the top 100 in the world, New Zealand has also made its move. 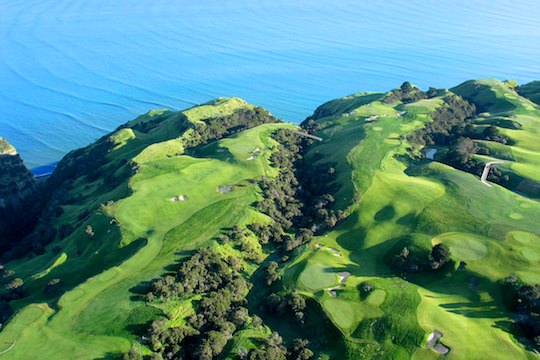 In the top echelon of the world’s courses – the mighty Cape Kidnappers in Napier, New Zealand

Latest rankings have not one, but two mighty New Zealand layouts rated in the top 100 in the world.

And you won’t need to guess for too long to work out that it’s Cape Kidnappers and Kauri Cliffs that hold sway.

Cape Kidnappers (Napier) is now ranked the sixth best course in the world, outside of the United States.

And its older ‘brother’ Kauri Cliffs (Bay Of Islands) is also favourably ranked at No 19.

I say brother, because both courses were commissioned by American millionaire Julian Robertson and in less than 10 years have joined many travelling golfers’ lists of “must play” courses around the world.

And the best part about it is both layouts are generally open to the public.

Amazingly, both of the primary global competitors in the course-ranking arena, Golf Digest (US) and GOLF magazine (US) continue to rank both Cape Kidnappers and Kauri Cliffs among the world’s Top 100 courses — even when all those courses in the US are also considered.

Yet no Asia-Pacific course open to public play ranks higher than Cape Kidnappers.

The last time the US magazine did rankings, in 2009, Cape Kidnappers was ranked 13th and Kauri Cliffs 25th – so both have had significant lifts in the rankings.

Overall, there were 29 from the region represented among the new Top 100, whereas only 17 were cited in the 2009 ranking.

Joining Kauri Cliffs and Cape Kidnappers among resort courses in the top 20 for 2012 were Barnbougle Dunes (Tasmania) and the Kawana Hotel’s Fuji Course in Shizuoka, Japan.

According to director of golf at Kauri Cliffs and Cape Kidnappers, Ryan Brandenburg there are many courses in Asia-Pacific rightly considered ‘world class’.

“But what good is learning that a club is ranked so highly if it’s private – and traveling golfers cannot play it?,” he said.

“Accessibility should be of primary importance to anyone who pays close attention to such rankings.

“We were thrilled to be ranked so highly among courses outside the US because while we consider our clientele to be worldwide, we are a proud part of the Asia-Pacific golf community.”

“It’s important that golfers in Australia, China, Japan and Korea and across the rest of south-east Asia recognise that Cape Kidnappers and Kauri Cliffs are special and the highest-ranked, most celebrated courses in the region they can play.”

“New Zealand can represent a significant journey to some, but here is more proof that the golf, along with our accommodation, cuisine and natural surroundings, make that journey worthwhile.”

Cape Kidnappers and Kauri Cliffs are owned and operated by American hedge fund legend Julian Robertson, who first visited New Zealand in 1979, and has since adopted it as a second home.

In 2000, Robertson opened his first property, Kauri Cliffs GC, which looks out upon the ultra-scenic, North Island archipelago known as the Bay of Islands.

The David Harman design was immediately ranked among the top 100 in the world.

In 2004, course architect Tom Doak unveiled Cape Kidnappers, which has come to be ranked even higher.

Cape Kidnappers is an actual landform unto itself, a triangular headland where white cliffs jut eight kilometres out into the Pacific Ocean from the North Island community of Napier.

“Frankly we are eager for the various golf publications to assemble a top 100 that simply takes into account accessibility, course merit, and the quality of on-site lodgings,” said Brandenburg.

“These are the factors traveling golfers mostly strongly consider: The course cannot be private, naturally, and who wants to shape a golf holiday around a great course that doesn’t have a hotel on site, or doesn’t provide world-class food and wine?”

“Some day that list will be compiled and we are confident that both Cape Kidnappers and Kauri Cliffs would rank among the top five in the world.

“It’s clear that a major part of our appeal is the extraordinary natural landscape of New Zealand.”

“No-one can take credit for that, and it’s such an integral part of the experience at all of our properties — on the golf courses, in the lodge, at cliff-top or down on the beaches.

“But it’s something we do work hard to protect and foster.”