Aussie Richardson moves at Players Am

Kalem Richardson is one of the hardest workers at the game and his efforts are paying dividends.

The 24-year-old Melbourne based Tasmanian is within striking distance for his first main US amateur title with three strokes separating him from tournament leader, American Corbin Mills, going into the final round of the Players Amateur at Belfair Golf Club’s West Course in South Carolina. 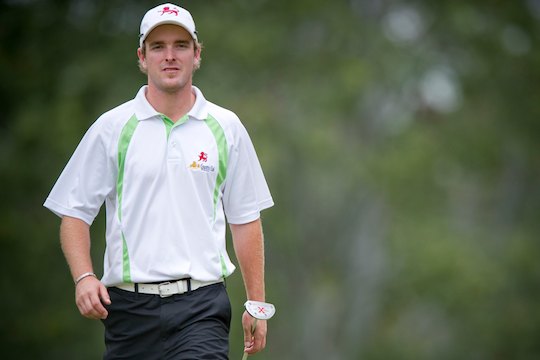 “I’m excited about getting out there tomorrow,” says Richardson, who has won consecutive home state titles with the 2011 Tasmanian Amateur.

“My game was a little sloppy today, but I managed to get out on the range after and sort things out afterwards. Corbin [Mills] is playing well, but I’m just going to go out there to focus on my own game and hopefully things will fall my way.”

Holding a round together in a top US amateur events is never easy as the fields are strong and any number of players can make a late final round charge.

Richardson has the experience and game to match it with the world’s best.

With more than two US tours to his credit, as well as international experience representing Australia at the recent Ashes series against the UK, Richardson knows what it takes to close the bigger events out.

“I have a lot of confidence out there at the moment,” says Richardson.

“I’m just going to try and enjoy the day tomorrow. If a result falls my way that’s a bonus, but my game is there so hopefully a few putts will drop and I’ll post a low number.”

“You have to stay in the zone and play knowing that not everything will be perfect, yet take the opportunities as they arise.”

Todd Sinnott is having another stellar US tournament after a top-20 finish at last week’s Rice Planters in his maiden US amateur tournament and is the next best Australian behind Richardson.

New Zealander, Ben Campbell, is in the mix at 1-under-par after rounds of 76-66-73, with Campbell’s second round 66 the tournament low round to date.

Campbell’s tournament low rounds was timely with the New Zealander being hampered with a toe injury over the last few weeks.

“The 66 gave me a lot of confidence and hopefully I can take that form into next week,” says the Kiwi.

“Europe was a bit disappointing for me. I’ve had a foot injury over the last few weeks and slowly it’s getting better. I feel fit and the game is coming around nicely.”

Fifty players, including seven Australians, made the cut of 4-over par.

Brett Drewitt was the final Australian to make the cut at 4-over-par following rounds of 74-71-75.

The winner of the Players Amateur will earn an exemption into the 2012 RBC Heritage on the lucrative PGA Tour.