The kid’s an ace and just nine years old

Good golfers just seem to get younger and younger these days – but this one just might be a record.

Nine-year-old Reid Brown certainly had club officials at Wingham Golf Club rifling through the record books last month after he aced the 157m par-three seventh at their club in a recent Saturday competition. 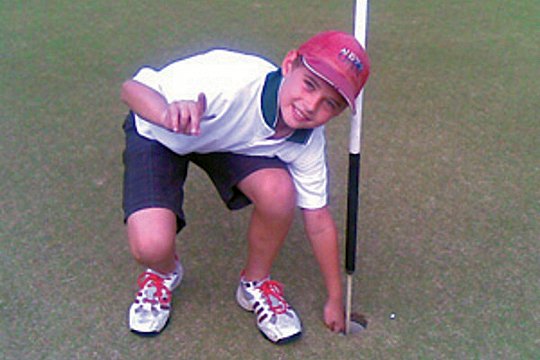 For a start it is extremely rare for a golf club to even let golfers that young into their field.

So the club was rightly excited at the prospect Reid could be the youngest to ever achieve the feat in a registered club competition.

Certainly he’s a chip off the old block, Reid’s father Rod has won seven A grade matchplay titles at the Wingham club as well as “three or four” strokeplay titles so has obviously spent plenty of time showing his young son the ropes.

“Not really,” laughs Rod, a farrier in Wingham. “He’s pretty much a natural and has actually been playing since he was three. The funny thing is, Reid reckoned it had taken him seven years to get the ace – not bad for a nine-year-old.”

Reid actually began playing off a 27 handicap and although still knee-high to a grasshopper, has already got his handicap down to 17. He had no hesitation reaching for the five-wood which he duly knocked into the hole – in front of his father – during their Saturday comp.

It was almost a sad state of affairs for the young golfer who had only an hour or so earlier spent a five-dollar ball voucher he had in the pro-shop.

Reid “snipped” his father for a few extra dollars so that he could buy a top-of-the-range Titleist ball for his round. He was filthy when his playing partners insisted on him surrendering the ball so that they could get it mounted as a trophy for his extraordinary feat.

“Fair go, I’ve only played seven holes with it,” complained the rookie golfer.

And one those seven holes was only one hit.

Still he was a lot more satisfied when they pointed out that he had also won a $100 voucher for his feat. And he gets his name on the honour boards at the club . . . even if he was too young to have a celebratory beer.

“He has all the shots, knows how to behave himself on the course and obeys all the etiquette rules as well. He’s a terrific young man.”

Pedran said when he teed the ball up young Reid hit the perfect shot and there were cries from his father of “that’s in the hole”.

“Actually it was the perfect shot, it bounced about four metres short of the hole and rolled straight in,” his father told Golfer Pacific.

That resulted in high fives all-around on the seventh tee.

Reid has played a few nine-hole competitions in Sydney and already figures in some of the age titles at bigger events.

He finished 15th in the Public State Schools golf titles last week and can still compete in those for the next two years.

He’s also been named in the Hunter Development squad and is definitely a player of the future.

Naturally there was no prouder person in the club than his father, Rod, a two-marker who figures in the results there most weekends.

But he was happy to take a back seat this time – and he knows that won’t be the last time he is upstaged by this young family member either.

“He plays at least once a week and practises a fair bit. We have a practise hole and a bit of a driving range on our property. There’s also a cricket pitch and horse stables – so its not a bad place for kids. They certainly spend more time inside than outside, which is a good thing.”

Reid also has a 12-year-old sister, Maitlan, who can’t decide whether she wants to play soccer, cricket or golf – and is pretty handy at all three.

She’s already made the NSW girls cricket squad, has played for the state in soccer and finished fourth in one of the major junior golf events last year.