Designed to deliver distance from tee to green and reduce hooks and slices, Callaway’s new Superhot 55 Golf Ball has a low 55 compression that makes it feel incredibly soft.

The ball’s aerodynamics promote low drag and optimal lift to keep it in the air longer with a strong flight, so you get distance off the driver and all the way through your short irons. 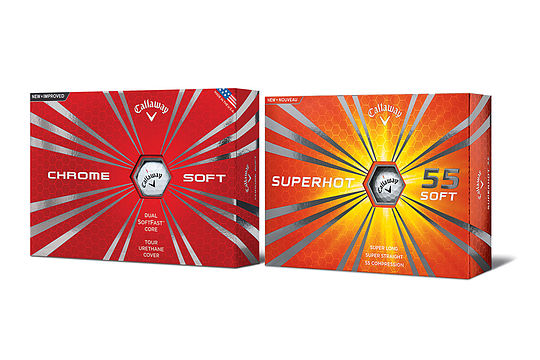 The Superhot 55’s soft mantle and cover system work together to create low spin, which reduces hooks and slices for a more controlled, straighter ball flight, while soft-feeling 55 compression allows you to compress the ball at impact.

Callaway has taken a ball that redefined golf ball performance and improved it to deliver more ball speed off the tee, more control from your scoring clubs and incredibly soft feel.

The new Chrome Soft features the company’s proprietary Dual SoftFast Core, which is engineered for fast ball speeds and delivers low spin for players who need spin reduction to optimise their launch conditions off the tee.

With its low compression, the new Chrome Soft allows golfers to compress the ball on iron shots for long, straight flight, while delivering amazing feel around the greens.

The four-piece construction, mantle layer and Tour Urethane Cover combine to deliver even more control throughout the bag, especially with scoring clubs from 100 yards and in.

Callaway’s optimised HEX Aerodynamics makes the ball flight even better in all conditions.