Callaway has announced the extension of its Major-winning XR family of products with the launch of Steelhead XR Irons and Hybrids.

Steelhead XR Irons combine the iconic shaping and playability that made Callaway’s Steelhead X-14 one of the most successful irons of all time with next-generation 360 Face Cup™ Technology, which allows the edges of the ultra-thin face to freely flex and release at impact with greater efficiency, adding ball speed that promotes more distance, especially on off-centre hits.

The boost in face speed is so significant that it has increased the COR (spring-like effect of the ball leaving the face) close to what is legally permitted under the Rules of Golf.

Dr. Alan Hocknell, Senior Vice President of Research and Development, Callaway Golf, said: “When designing the Irons we paid special attention to some of the design aspects on the original Steelhead Iron, including a slightly longer blade length, a slightly more rounded toe and the signature hosel-to-face transition.”

“Then by bringing in technologies such as the 360 Face Cup™, you have a product that delivers the finest combination of speed, forgiveness, distance and control to ever emerge from the Callaway R&D department.” 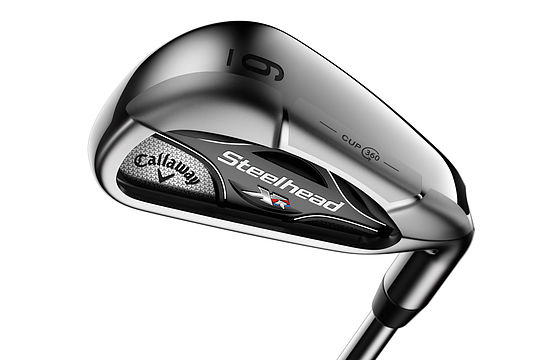 More speed and distance on mis-hits is made possible thanks to a modern Hollow Bore-Thru hosel design, which allowed Callaway engineers to remove weight from the hosel and reposition it in strategic areas within the head.

This increases MOI for more forgiveness on mis-hits and precisely positions the CG strategically in the long, middle and short irons.

Enhanced feel and sound are delivered by the new steel-infused polyurethane layer positioned low in the head, behind the lower portion of the face.

In addition to absorbing unwanted impact vibration to promote a remarkably satisfying sound and feel at impact, it also helps lower the CG to promote faster ball speed and higher launch characteristics for more distance.

To complement Steelhead XR Irons, the design of the new Steelhead XR Hybrids takes hybrid design to the next level.

Compared to XR Hybrids, the head is longer from heel to toe and deeper from front to back, with a deep back CG, all of which combines to make Steelhead XR Hybrids even more forgiving and easier to launch.

Likewise, the face of each Steelhead XR Hybrid is larger and incorporates next-generation Hyper Speed Face Cup technology that allows the edges of the face to flex and release faster at impact, raising ball speed on both centre and off-centre hits to promote more distance.

With Callaway’s Speed Step Technology, designed with the assistance of aerospace experts, airflow has been improved to promote faster clubhead speed for more distance.

Both the Steelhead XR Irons and Hybrids will be in Australian stores from September 15, 2016.