Overhauling how distance and forgiveness should feel, Rogue Irons push ball speed capabilities into previously unseen areas, creating a combination of distance, accuracy and playability never before experienced in a Callaway Iron.

The key technology at the heart of the new Rogue Irons is Urethane Microspheres. R&D experts at Callaway found that high-COR iron faces promoting faster ball speeds are subject to a significant amount of vibration at impact, resulting in a harsh, ‘clicky’ sound and feel.

Inserting a layer of soft material in the head has proven effective at absorbing vibration to improve feel, but with the unwanted side effect of slowing the face. 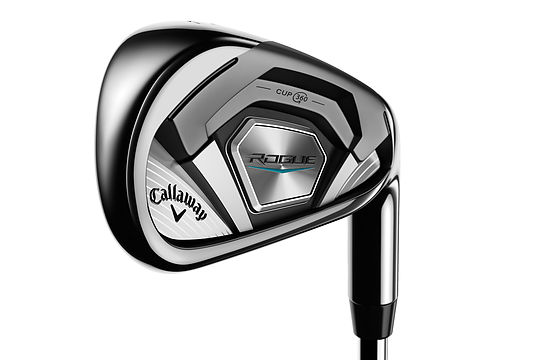 At impact, the microspheres change shape and flatten to create room for the urethane to flex to prevent slowing the face. The urethane also does the job of dampening unwanted vibration that leads to poor sound and feel.

Furthermore, multiple innovative clubface technologies work together to deliver more ball speed across a huge area of the face for more average distance.

The enhanced 360 Face Cup employs a shallow, flexible rim around the perimeter that flexes and releases at impact to increase ball speed. Whilst Variable Face Thickness technology (VFT) influences how the face then flexes to promote more ball speed on off-centre hits.

Finally, the metal-injection moulded (MIM’d) tungsten-infused Internal Standing Wave, first developed in the Epic Irons, located inside each head and twice as heavy as steel to concentrate weight in a specific area, allows precise placement of the CG for optimal flight and control.

Dr. Alan Hocknell, Senior Vice President, Research and Development at Callaway Golf, commented: “The technical complexity of Rogue Irons propels performance into the unknown. We have created a new class of iron here, beyond anything launched at Callaway before.

“The Rogue philosophy is to break away from established protocols and develop new ways to extract maximum performance from a golf club and this particularly comes to the fore in the exciting new Rogue X Irons.”

By placing key performance ingredients into an oversized Rogue X head with a longer blade and wider sole (pushing CG deeper and further back from the face), and coupling this to lighter shafts with stronger lofts, design experts have unlocked incredible ball speed and distance capabilities.