Famous for their luxury golf cars, Mercedes-Benz have switched their focus to golf carts with the prototype, the Vision Golf Cart dripping with innovation.

That’s because Mercedes called on golf fans from all over the world to tell them what they want to see in a golf cart – and the results are quite staggering.

The Vision Golf Cart boasts such “luxuries” such as an i-pod dock thanks to a centre console that incorporates a multi-media panel including a rotatable docking station for an iPad or iPhone and a USB interface.

Various functions also available in the golf cart can be controlled from there.

That includes vehicle functions such as loudspeakers or the air-conditioning system, the head-up display, the music system or even communication with the clubhouse and other golf carts.

If required, the head-up display integrated into the windscreen can also be used when the golf cart is stationary, to show the course layout, the current status of the game or even the weather information.

And one wish that came up time and time again was the possibility of being able to use a telephone in the cart.

So the ‘Vision’ features Bluetooth, allowing telephone calls to be made via the loudspeaker system while on the move. 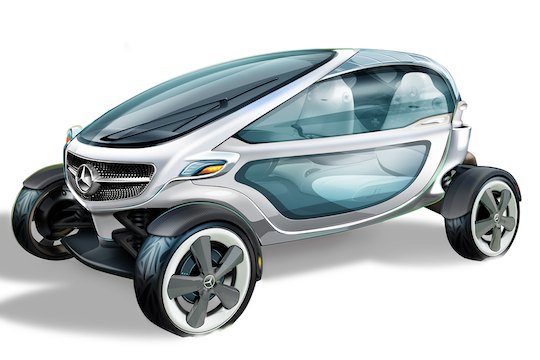 There’s even headlights if its starting to get dark as you near the end of your game.

Let’s face it, with a “toy” like this you probably will continue to play until it’s too dark to see the ball anyway.

The cart even has a button you can hit which shouts “fore” should one of your partners hit a wayward shot.

The German automaker recently introduced the Vision Golf Cart concept to the world.

And the solar-powered two-seat carriage even has heated and cooled seats to give you a more comfortable ride into the next century.

Finally, typical of this world leader in car manufacturing, the diamond grille was incorporated to give the cart a modern face that is unmistakably Mercedes-Benz.

There’s no word on when they will be available to the general public.

But you can bet there will be a backlog of orders for the Vision.