Over a decade of research and insight from some of the world’s greatest golfers, including Tiger Woods and Rory McIlroy, prompted Nike engineers to embark on a new putter design that minimises distractions.

As David Franklin, Nike Golf Master Modelmaker explains, “When we design a putter, our entire goal is to make the putter an extension of the athlete. We want them to step onto the green without even considering the putter in their hands, but rather just be thinking about getting the ball in the hole.” 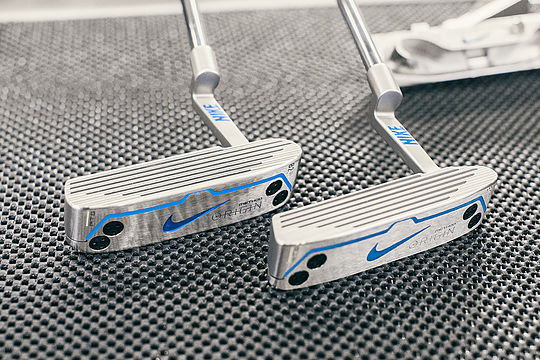 That mission led engineers at The Oven to craft a classic-looking blade putter filled with performance-boosting innovations, including integrated RZN. RZN is a family of responsive materials also used in the Nike RZN golf balls.

In the case of the new Method Origin putter, they employed a unique construction comprising three pieces: the face, a secondary mass on the back and a RZN layer compressed in-between.

Together, these pieces form the premium Nike Method Origin putter that has already recorded four global wins in the hands of McIlroy and Charl Schwartzel, who is currently averaging 1.3 fewer putts per round this season (28.9) compared to 2015 (30.2) on the European Tour.

The compliant RZN layer is activated on off-centre hits, returning energy to the golf ball within the contact time.

Insights from Woods and McIlroy, who put the putter into play at the 2015 Tour Championship, then pushed Franklin and team to make the putter roll more efficiently. So they completely reengineered the polymetal groove technology to offer full-length grooves that are linear from heel to toe. This orientation is designed to provide a more consistent, efficient and faster forward roll.

“When I first tested it in Dubai in January 2015, I realised the long putts kept rolling just a little bit more. It just kept rolling and rolling, which was awesome,” McIlroy recalled. “Then I tested again at Sage Valley in April 2015 and loved it. From that point I kept asking, ‘When can I get this in the bag?’ I added it in September 2015 and it has been in the bag ever since.”

“I love the new grooves,” McIlroy said. “The roll was perfect and I felt like the contact was so much softer than my previous putter; it got the ball rolling so much quicker.”