The sophisticated design of each of the three new models incorporates specific features and technologies developed to promote improved superior performance. 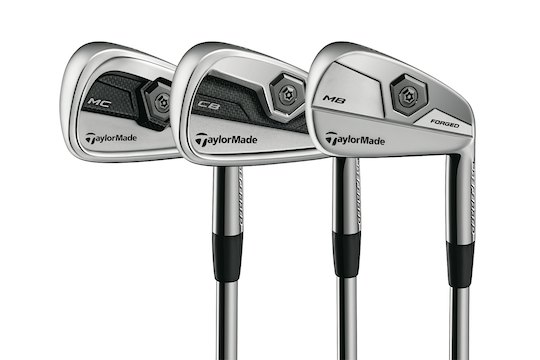 The TPMB and TPMC are both created using a state-of-the-art shaping process and modern, 6-step forging procedure that results in pure feel. The TPCB employs a multi-material construction comprised of a forged face and cast body.

TPMB: Innovation in a Forged Muscleback

The Tour Preferred MB is a finely wrought muscleback blade expressly designed for the purist. With clear lines, a compact player’s shape and minimal offset, the TPMB delivers the pure feel, feedback and workability coveted by blade fans.

The exclusive, 6-step forging process employed produces a more precisely shaped and finished head that looks and performs like a work of art. A thin topline, thin sole, straight leading edge, minimal offset and tapered hosel work in conjunction to promote the kind of pure face-to-ball connection sought after by skilled players.

In addition, the TPMB incorporates TaylorMade’s innovative new precision-weighting port in the back of the clubhead to solve an age-old problem. In the past, clubmakers have installed cartridges of varying weight in the hosel to assure that each iron in the set is of uniform swingweight.

The TPMB also incorporates an advanced, USGA-conforming groove design to promote more spin and control from the rough, a crucial advancement in making it the ultimate player’s performance iron.

The standard shaft and grip properties were chosen with input from TaylorMade Tour Staff professionals, and include True Temper Dynamic Gold shaft —the most widely played on tour—and Tour Velvet grips, a combination deemed optimal for promoting consistent and responsive performance.

TPMC irons are designed with a clean, classic and maneuverable player’s shape that offers the optimum blend of feel, workability, and forgiveness. By incorporating a compact, shallow cavity, the irons deliver the feel and workability of a forging plus a degree of added stability.

The leading edge features minimal heel-to-toe radius with the ideal amount of camber to cut cleanly and precisely into the turf with little to no resistance.

Additionally, the advanced groove design promotes more spin and control from the rough.

The Tour Preferred CB is a multi-material forged cavityback that’s beautiful, powerful and playable. Designed with a two-piece head, the TPCB’s advanced construction melds a forged face with a cast body that incorporates an undercut cavity to deliver the pure feel of a forged iron and the forgiveness of a deep cavityback.

The TPCB boasts the highest MOI of the three new irons. That, combined with its Inverted Cone Technology (the only iron of the three with ICT), which promotes faster ball speed on off-center hits, helps make the TPCB extremely forgiving for consistent distance from shot to shot.

Additionally, the TPCB features the same new, advanced groove design to promote more spin and control from the rough.

The TPCB irons is the only model of the three being offered in both steel and graphite shafts. The steel is a new, 110-gram, mid-flight True Temper Dynamic Golf XP, which is lighter and promotes higher flight compared to the standard Dynamic Gold steel shaft. The graphite shaft options, developed by Fujikura, are offered in 90-gram stiff flex and 80-gram regular flex. Tour Velvet grips are also standard.

All three of the new TP forged irons are offered in three shaft flexes – X, S, R. The TPMB and TPMC are available in the 2-iron through pitching wedge in steel shafts only.

The TPMB, TPMC and TPCB irons become available at US retail starting in March 2011.