The modern Burner driver, introduced in early 2007, is the best-selling driver in TaylorMade history. It introduced golfers to a groundbreaking development called SuperFast technology that allowed them to swing the club faster for greater distance.

Last year, SuperFast technology was improved to make the Burner SuperFast driver lighter, longer, and faster than any previous generation Burner. It delivered on its promise of improved aerodynamics and massive distance and, by the end of 2010, achieved remarkable success on Tour and in the marketplace. More than 50 professionals put the Burner SuperFast in play on the PGA Tour alone and the driver was used in 14 victories worldwide, most notably the FedEx Cup TOUR Championship. 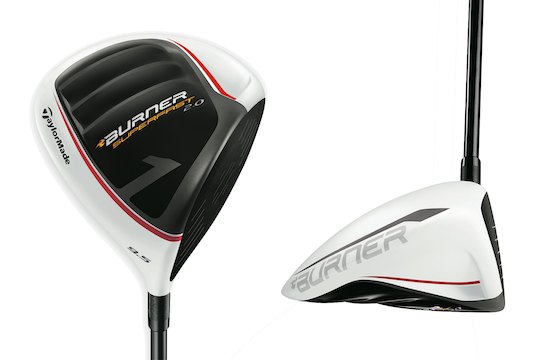 The Burner SuperFast 2.0 driver is newly shaped to deliver the benefit of our Dual Crown Technology – designed to create a lower CG to promote a higher launch angle and lower spin-rate, the launch conditions that promote greater distance – but with a more conventional head shape. In addition, the Burner 2.0 incorporates SuperFast Technology, including a longer shaft, lighter weight and more usable face area.

Largest Clubface of Any TaylorMade Driver

The Burner SuperFast 2.0 drivers boasts one of the largest faces in golf at an expansive 4,550 square millimeters, and the deepest face/largest address footprint combination. The clubhead’s Ultra-Thin Wall (UTW) construction combined with a more triangular address shape and profile shape allowed us to stretch the geometry to improve performance and playability. The larger face is important in light of the fact that the longer club-length makes it more challenging for the average player to make square contact consistently; the larger face provides more area with which to strike the ball.

The exceptionally deep face provides more area for impact above the center of the face, which promotes a higher launch angle and lower spin-rate, the launch conditions that promote long distance. To improve performance without sacrificing feel and playability, we carefully recalibrated the shaft and head mass properties to enhance playability and a moderate draw bias with a “measured square” face angle.

The Burner SuperFast 2.0′s distinct white crown, when paired with its black PVD-finish clubface, provides optimum contrast for easier and more consistently accurate alignment. The crown color also eliminates high-intensity “hot spots” caused by reflected sunlight that afflicts gloss-finish metalwoods. This is very important, since golfers tend to be longer with these clubs, and if the face is poorly aligned at impact, then the shot can be directed farther off-line for an equivalent impact misalignment.

Additionally, a white metalwood head looks 2% larger compared to the same-sized black head because the white border bleeds into the darker sides. This promote more confidence and a fast, free swing.

Our Lightest Driver Ever

A vital upgrade to the Burner SuperFast is the new Winn Lite grip that weighs just 25 grams, yet it sacrifices nothing in terms of feel and traction. It’s a critical component in making this club, at 279 grams, the lightest driver we’ve ever produced. The driver measures 46.5″, a length that, in concert with the lighter grip and improved aerodynamics, promotes five more yards than the Burner SuperFast.

Also critical to the Burner SuperFast 2.0 driver’s performance is its Matrix Ozik XCon 4.8 shaft, which is both ultra-light and tip-soft, helping the golfer generate more ball speed, a higher launch angle and more spin to promote more distance.

The TP’s aerodynamic clubhead shape promotes faster swing speed for increased distance, while the open face and weight in the toe enables the driver to be swing-weighted differently than the Burner SuperFast 2.0 to promote a neutral bias.