Extensive Tour testing influenced every detail of the new Ghost Spider S – one of the most stable putters TaylorMade has ever created. In addition to its new, tour-inspired shape, the Ghost Spider S is revolutionary in terms of control and feel. 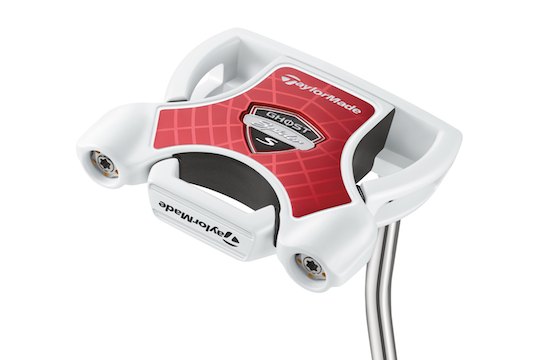 The exceptionally high MOI makes Ghost Spider S extremely stable on off-centre hits, and it also makes it easier to control the head and square the face to the ball at impact, a key benefit that has been consistently called out by the tour pros who have put it in play.

In its second official week on the PGA Tour, at the Wyndham Championship, Ghost Spider S was the number one overall model with seven in play.

Among those to play the Ghost Spider S this year include, Jason Day, YE Yang, Spencer Levin, and European Ryder Cup player Peter Hanson, who recently won with it at the KLM Open.

The contrast between the white leading edge and black crown makes it easier to focus your eyes on the topline, making it easier to aim accurately.

In addition to the standard hosel, the Ghost Spider S will also be available in a Tour-inspired “short slant” hosel designed for the player who has an arched swing path. Unlike the standard hosel, which promotes a straight back-straight thru swing path, the short-slant is toe-weighted and broadens the scope of players who can benefit from the performance characteristics of the Ghost Spider S.