In one of the most exciting consumer trial programs Nike Golf has ever introduced, the company is conducting Speed Trials from May to July at golf courses and retailers across Australia.

Throughout the season, Nike Speed Trials will offer consumers the opportunity to experience Nike’s fastest lineup ever: the VR_S club line. 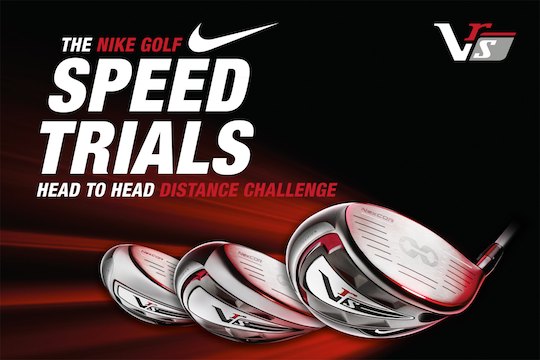 Nike Speed Trials will allow consumers to compare the speed and distance of clubs in their current bag, as well as other demo clubs, to the new Nike VR_S products on a launch monitor.

They will also have the chance to win a trip to the F1 Singapore Grand Prix in the ‘Speed Trials Challenge’.

Registered participants will have 3 drives and their longest drive recorded on a national leaderboard, with the winner heading to the ultimate speed event, the F1 Singapore Grand Prix in September 2012.

Beginning on Thursday May 17th, at Victoria Park Driving Range in Brisbane, consumers will be able to participate in the Nike Golf Speed Trials.

Speed Trials will also be held at retailers including Golf World, Golf Mart, House of Golf, Power Golf & Golf Box in WA. There will be various major prizes at each of these locations and participating consumers will also receive a 20XI three-ball sleeve, while supplies last.

Go to www.speedtrials.com.au to find an event near you.

Generating more distance for every shot, the Nike VR_S is an extension of the original VR line, which has more than 85 worldwide professional wins including three major championships.