Building upon the overwhelming momentum and immediate success of the popular TSi2 and TSi3 metals, Titleist has introduced the new, comprehensive TSi1 family, engineered for the moderate (less than 90 mph) swing speed player seeking increased club and ball speed with control off the tee and from the fairway.

The moderate swing speed player represents approximately 30 percent of all golfers making the TSi1 metals an important offering to maximise your performance potential.

An Ultra-Lightweight 460cc driver, the TSi1 is almost 40g lighter than standard drivers. It is high launching with mid spin and is the most draw biased Titleist driver through CG positioning. By reshaping the head, engineers were able to move the CG closer to face centre, which results in more ball speed versus the original TS1. 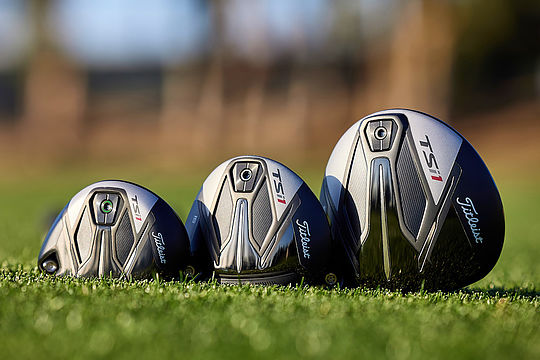 “It’s important that we look at the overall weight of the driver,” said Titleist’s Josh Talge. “For this audience, the moderate speed player, they are going to perform better with a lower overall club weight.”

“Secondly, it has all of the attributes of the TSi2 and TSi3 in terms of material, aerodynamics, and all of the CG locations, but we’re doing it with a lighter weight head. The combination really gives that total performance to the player for whom it was developed.”

The TSi1 fairway metals are a true lightweight setup – almost 50 grams lighter than standard fairway metals. This was accomplished by taking 10 grams of weight out of the head while maintaining the MOI at the same level as the TSi2 fairways.

Like the TSi1 driver, lightening up the overall weight for fairway metals delivers the club speed, brings more ball speed, and gives that player a lot more playability and consistency.

“We have seen many tour players put higher lofted fairway metals, especially 7-woods, in the bag since the introduction of the TSi line,” said Talge.

“While the TSi1 is not a tour product, the interest in them by players at the highest level has exposed an opportunity to expand to the moderate speed player and offer higher lofted fairways (15º, 18º, 21º, 23º), which we have never done before.”

The TSi1 features an Aldila Ascent 40g lightweight shaft offering, a lightweight Golf Pride grip, and the head is 10g lighter. By taking 40 to 50 grams out of the overall club weight, the TSi1 is a perfect fairway metal option for slow to moderate swing speed golfers.

The larger profile, ‘wood-type’ TSi1 hybrids are engineered to deliver high launch and mid-spin, and feature a 455 Carpenter Steel Forged Face. It also has a deeper CG for high MOI and exceptional stability and speed across the face.

The Titleist TSi1 hybrids range in lofts from 20º to 29º. In testing, moderate swing speed players preferred it, especially when they were able to generate more club speed and more distance.