Master Craftsman Bob Vokey and his pioneering R&D team continue to shape the future of wedge design with the introduction of the new Titleist Vokey Design Spin Milled 7 wedges.

Vokey’s prior generation SM6 models ushered in a new era of wedge innovation and performance with their groundbreaking Progressive Centre of Gravity (CG) design.

The advancements made with SM7 – already the most played wedge model on the PGA Tour, with four SM7’s in the bag of Jordan Spieth – further widen the performance gap between a Vokey and all other wedges.

The fastest way to a better short game is through a wedge fitting. Developed through his collaboration with the world’s best shot makers, Bob’s six tour-proven sole grinds – F, S, M, K, L and the new D grind – allow golfers of all skill levels to be precisely fit for their swing type, shot making style and course conditions. 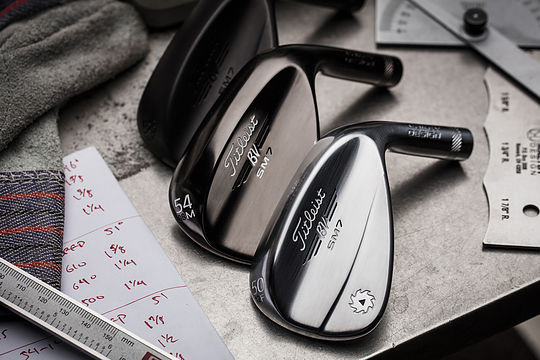 NO.1 WEDGE ON TOUR

To open 2018, Patton Kizzire put a new Vokey SM7 (48.08 F) pitching wedge in play at the Sentry Tournament of Champions. The following week at the Sony Open, Kizzire added two more SM7’s (52.12 F and 56.08 M), which he used in winning the event for his second PGA Tour victory.

The darker Brushed Steel finish is richer and slightly more polished when compared to the Steel Gray offered in SM6, while maintaining a non-glare finish in the playing position.

The raw Jet Black has been enhanced with black paint fill in the logos and graphics, inspired by requests received on tour by Vokey Tour Rep Aaron Dill.

SM7 wedges can be custom ordered with a wide range of specifications and personalisation, including an industry-leading selection of shafts, grips, shaft bands, ferrules, stamping and paint fill.