A ‘player’s iron’, the new T100 offers more precise flighting and control, fully forged feel, a more versatile sole design, and plays like the commanding and consistent field favourite it is on tour. The T100 irons are designed with a new Tour-preferred brushed chrome finish and are aimed at the better player who is looking for precision control and unrivalled feel.

“The sole just glides through the ground so nicely. With the added bounce off the toe and the reduced bounce in the heel similar to the wedges that we have on those grinds, it just allows for some consistency when you get a little bit off,” said Jordan Spieth ahead of the Open Championship where the 2017 champion put the new irons into tournament play for the first time.

“The idea that you can be on uneven lies and have it kind of make up for that, and then if you get in the rough and have it not drag as much, but instead slide through just as easily, that’s where we see the improvement in these irons.”

“What sets these irons apart from the competition is the precision and feel they provide the golfer. Irons are scoring clubs and it is important to the T100 player to hit their number and hit it more consistently. With that as a priority, we took the best performing iron in the game and made it better by adding high density tungsten, which is the engine of our iron designs. It allows us to put the CG where it needs to be, provides stability and builds up MOI,” said Marni Ines, Director, Titleist Irons Development, Golf Club R&D. 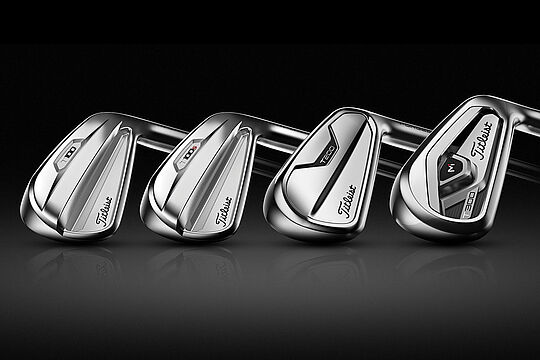 The T100•S now boasts an even closer connection to everything the world’s best players prefer in the T100 – only more.

It’s the Faster Tour iron and ideal for the player who wants the exact look and feel of a Tour iron, but wants to hit it farther.

“The uniqueness of the T100•S comes from the fact that we engineered the 2º stronger loft into the iron rather than just bend them. In addition, the ‘S’ represents ‘speed’ and the new Muscle Channel delivers it through the long and mid irons by providing longer distance, tighter dispersion and higher angle of descent for greater consistency and scoring opportunities. It has the same look and feel of the T100 but longer flight for those who want it,” said Marni Ines, Director, Titleist Irons Development, Golf Club R&D.

For the player who wants distance help, without sacrificing looks, forged feel, trajectory or stopping power, the T200 iron evolution represents the biggest shift within the T-Series family.

With 10 different patents utilised in the new T200, it is Titleist’s most advanced iron ever. Titleist Golf Club Research and Development took all the best of the previous generation T200, then streamlined the Max Impact technology, utilised denser tungsten weighting, and updated the shape with reduced offset, a thinner topline and shorter blade profile.

The result is a sleek look with stunning distance. Every element of the multi-material construction is engineered to create maximum speed with Tour-validated feel and distance control.

The size and shape of the T300 is designed to provide confidence, while a new chrome plated finish provides a premium look.

“The T300 is the ultimate Titleist game improvement iron. It is for the golfer who wants high launch, long distance and forgiveness, and wants to see the technology they are using,” said Josh Talge, Vice President of Marketing – Titleist Golf Clubs.

Local Titleist fitting locations can be found at www.titleist.com.au