An elderly Aussie golfer has vowed to return to golf despite being bitten by a saltwater crocodile as he retrieved a ball from a water trap during a round in Australia.

John Lahiff, 75, was playing at the Palmer Sea Reef Golf Course in Port Douglas, 70km north of popular tourist town Cairns, on Monday afternoon when he hooked his ball into the water on the 11th hole. 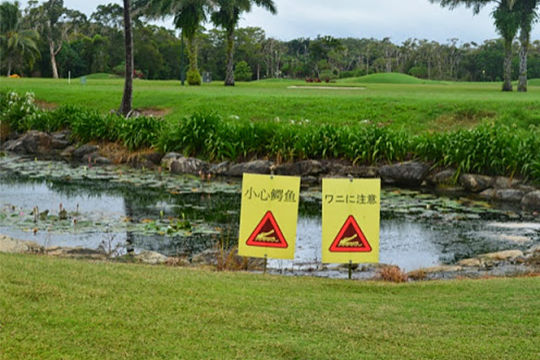 “I drove the cart around to retrieve the ball – and I didn’t see the croc sun-baking just on the edge of the water,” he told the Australian Broadcasting Corporation.

“I walked past it and then it got me on the way back and as soon as it grabbed me, it took off into the water.”

The 1.5m saltwater crocodile left him with a deep cut on his shin and puncture wounds to his calf.

He managed to drive himself back to the clubhouse where an ambulance was called and he was taken to hospital.

“I’ll just stay away from them, that’s all. Just don’t hit the balls in the water.”

Rangers were attempting to trap the reptile and relocate it to a zoo or crocodile farm but Lahiff said he would prefer it remained at the course, where signs warn that crocodiles inhabit the area.

“It’s partly my fault…for disturbing it while it was sun-baking,” he said.

“I think he got more of a fright than me. He’s all right.”

Crocodiles are common in Australia’s tropical north where numbers have increased since the introduction of protection laws in 1971, with government estimates putting the population at 75,000 to 100,000.