Broome will sweep you off your feet

It’s a big call, but members at Broome Golf Club reckon they’ve got the best golf course for 4000kms.

But then they can afford to brag. The course is, after all, the only fully grassed 18-hole track between Geraldton and Darwin. And, in the booming Western Australian north, it’s in big demand. 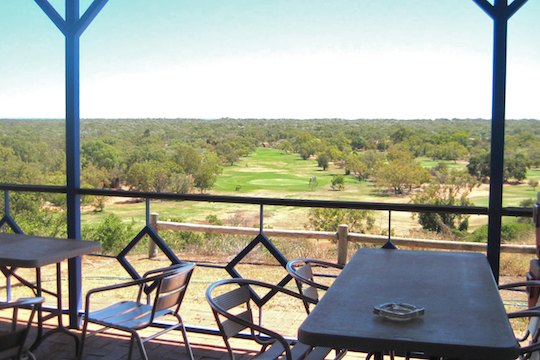 Nestling on a sand dune high above the scrubby flats, the club house overlooks the turquoise waters of Roebuck Bay on the Indian Ocean. Below it the fairways form a green belt between the sea and the desert.

And like the little club that roared, Broome Golf Club has lately been staking its claim in more ways than one, with much of the credit going to club president, Carol Howe, who’s held the reins for the last five years.

It was under her stewardship that the club hired its first professional, Billy Mins.

“We’re only a tiny club, with less than 400 members, so taking on a professional was a bit of a gamble,” Howe told Golf Grinder.

Indeed she does, especially last month when Broome hosted its 2011 pro-am, which attracted a massive field including 48 professionals, and a purse worth $35,000. Howe and Mins were instrumental in attracting a vast array of sponsors to the little known event.

When Mins is not doing what club professionals do, he doubles as the club manager. That’s the way they do things in Broome. Everyone pitches in. There’s an eclectic membership with a wide array of skills.

Players are drawn from the large number of tradesmen in the booming town, from the pearling industry workers, government workers and pastoral neighbours. One pastoral worker drives 70kms every Saturday for his game of golf.

“We’re not a rich club. We can’t afford a course designer so we’re working that out ourselves and, bit by bit, we’re redesigning the 45-year-old course and doing what we can with the clubhouse,” said Howe.

The Broome members have been building new greens from scratch and working hard to keep the fairways in lush condition, which is no mean feat in a climate that has two distinct seasons, one very, very wet, and one very, very dry.

“We have a lot of skills to draw on. The members renovated the clubhouse and many of them are working on ways we can create a better function centre,” said Howe.

Restricted by a location heritage listing, the club struggles to generate potential revenue from the Kimberly’s huge tourist trade because of its lack of social facilities.

“We have a very daggy clubhouse and until recently we had to drag a chair out into the dirt to enjoy the view and a BBQ but last year we built a deck,” said Howe.

The tourists do help the club though. During the dry season, Broome’s population grows from 15,000 to between 35-40,000, and after weeks of 4WD trekking through the Kimberleys there’s many a keen golfer looking for a game.

“A lot of tourists are hungry for a game of golf and they’re not disappointed when they play here. We’ve got an amazing array of wildlife. Some of the birds come all the way from Russia. And there are lizards on the course, who’ll just lumber by,” said Howe.

“Some of the green fee players are a bit shocked at the slower greens but because of the dry tropics we have to use a wider leaf grass on the greens which slows them a bit.

“As well as the tourists we’ve got a lot of seasonal members, people from down south who come up here for three to six months a year. They also help keep us afloat.”

What Howe won’t tell you about is the heat, the humidity, the flies and the 15-minute walk to the first tee, which can also be a bit of a shock to visitors but she will say that Broome is not for everyone.

“This is no Gold Coast, no matter what the tourist brochures say, or what Cable Beach looks like. It’s a small town and you either love it or you hate it. There’s no in between,” admits the former NSW TAFE teacher, who clearly felt the love.

After nine years in Broome, four years before that in Port Headland, Howe now calls the Kimberly home.

“I’ve built a house now so I’m here to stay. I love the climate, love the relaxed way of life and I love the golf club.”