Coote has also established a record unlikely to be beaten or rivalled in too many golf clubs – the 59-year-old has won the championship over a period of five decades. 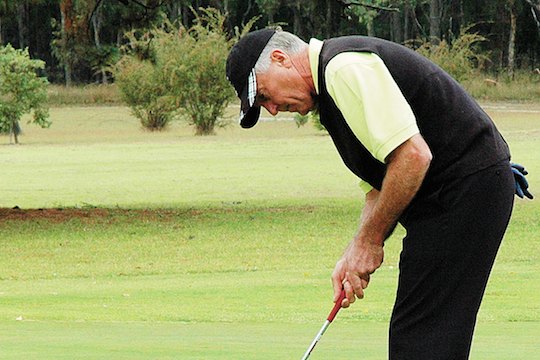 Playing off two (1.6), Coote returned a 14-over four-round score of 294 on the par 70 Inverell course in the recent championships, beating defending champion Phillip Fox by five shots. He carded rounds of 74, 76, 72 and 72 on the 5863 metre course to better Ratcliffe’s record of a dozen titles.

“Around this time of the year the course is fairly difficult and when I have won in the past my score has usually been between eight and 12-over,” he said.

“Everything considered, I was reasonably happy with 14-over.”

He started playing golf with some mates at age 11 and although he attended Saturday morning clinics with then club professional Bill Gosden, as a junior he never had a one-on-one golf lesson. Despite that, his handicap was sliced to five before he gave the game away at age 17.

“Like most teenagers back then, girls, cars and work became much more important to me than golf,” he recalled.

Five years later his love of the game was rekindled and in 1977, at age 25, he won his first club championship, defeating his mate and reigning champion Robert Fearnley. Back then he had many close tussles with Fearnley, veteran Ratcliffe and another outstanding junior, Robert Flemming.

And while Coote has remained a constant challenger over the subsequent four decades, he says many youngsters have thrown out the challenge including a number who have since turned professional.

“Maurie Moses, the Bath twins Mark and Sean and Craig Baldwin have won the Inverell championship in that time and gone on to turn professional,” he said.

“Two others – Jason Shaw and Perry Smith – had a dabble at becoming pros and a couple of young guys, Brett Drewitt and Jono Holder, were also club champions here and are playing some top-class amateur golf at the moment. So at various times over the years the competition has been pretty hot.”

However he rates the veteran Ratcliffe, now 76 and living at Sawtell, as the player with the most classical golf swing he saw, but says Perry Smith was the most talented.

“Perry hit it a mile and could do just about anything he liked with the ball,” he said.

Although his business – Sapphire City Security – keeps him busy, Coote says his love of the game has not dwindled and he intends to continue playing golf and challenging for the title.

“I realise it’s a long way off, but maybe I can make my record stretch out to a win over six decades,” he joked.