Like so many other golfers I’m scared of snakes. For as long as I can remember these silent, slithering, cold blooded creatures have terrified me and, for that reason alone, I’m happy to sacrifice any out of bounds golf balls. Growing up in the bush certainly didn’t help my phobia.

Where I come from the infamous Tiger snake reigned. 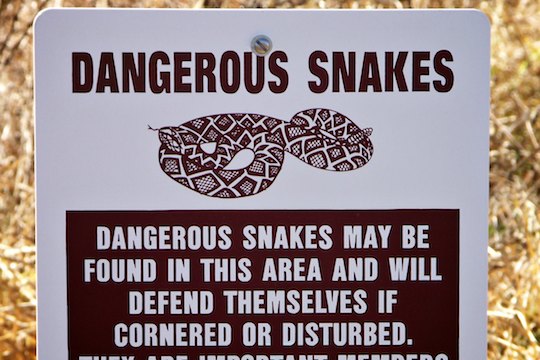 And while I rarely saw one alive, there was almost always a fresh carcass hanging on a paddock fence. Old shearers would tell us that no snake ever died before sunset. So we’d wait ’til after dark to go in for a closer look.

Even dead, the yellow bodies scared the you-know-what out of me. So sharing a golf course with the enemy has been both a challenge and an opportunity to get up close and personal with these legless lizards.

It was at tropical Bonville, outside Coffs Harbour, that I first came face-to-fang with a rogue reptile. And he was a beauty, stretching from tee box to tee box, with a girth the size of a basketball.

This was no venomous viper, just a passive python catching a few golden rays, but no-one was stepping up to “take the honour” and no amount of nervous persuasion could move him on. So we broke the rules, teed up a long way behind him and hit off in hope.

Later we could see him sauntering across the fairway comfortable in his own skin. He’d made his point. This was his home before any golf course came along.

The forefathers should have known that when they carved Wakehurst GC on Sydney’s northern beaches out of an ancient rock face. This area is home to the Red-belly Black and the notorious Brown.

During the years I was a member there I never saw a Brown but club folklore has it that a big boy lived up on the men’s tee on the 13th.

And while the red-bellies accounted for at least two recorded bites on local players who had trod on the wrong twig, the more I saw them the more I learned to appreciate them.

They were sleek, elegant and, thankfully, lazy. I even named a couple of them. There was Big Red who lived in the waterhole on the 7th, and Blackie who hung out around the 13th.

A companion nearly ran over Blackie one day as she talked over her shoulder while pushing her buggy off the 13th green. The old terror gripped me as I let out a mute scream, tongue tied but pointing to the path about a metre in front of her wheels.

The more I remonstrated the more she looked away from the danger ahead. Blackie understood me though, and drifted into the bush just before he could have been forced to remind us who’s land it was.

I tried to return the favour one day when I spotted him caught in the dangerous open of the 7th fairway with a flock of birds swooping in for the kill. They took it in turns to peck at him as he reared in defence.

He was clearly exhausted and shelter was a long way off, so I charged to the rescue like a demented Mary Poppins, flashing my umbrella at the incredulous birds. Blackie survived to terrify another unsuspecting golfer.

I haven’t played at Wakehurst for a few years but I like to think Blackie and his family are still there and I’m grateful to have shared this spectacular course with him. Not that my phobia is completely cured.

In fact I had a major setback a couple of months ago while playing Eagle Mountain in Scottsdale, Arizona.

There the “rough” is all rock and tumbleweed and that enticing rattling noise alerting me to where my ball was hiding was the ugliest, nastiest little surprise you’ll never want to encounter on the golf course.

It taught me to remember to read the “local rules” because Rule No.1 read: “Don’t look for lost balls – Rattlesnake season”!