Fairway footy is a winner for tragics

And after beating that same path during the winter months for 15 years, the man affectionately known in golfing circles as ‘Red’ has launched an on-line competition that combines both his passions. 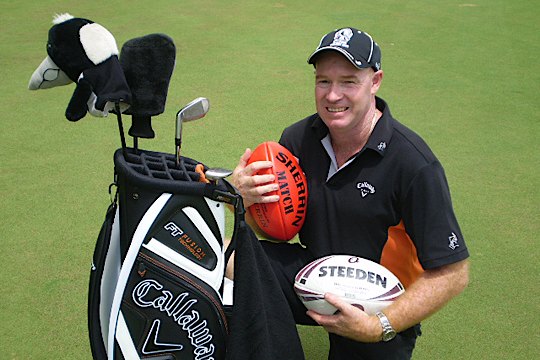 Fairway Footy is the brainchild of Shane Healey

Called Fairway Footy, Healey’s brainchild kicks off its second year in March, on the eve of both the NRL and AFL competitions.

Basically Fairway Footy is about combining weekly golf scores with the round-by-round results of the player’s favourite footy team – NRL or AFL – for the duration of the 2011 seasons.

Teams of two players – who must be from the same golf club – can enter the competition for a fee of $49.50 each. Overall winners will each take away $1000 worth of Callaway golf equipment.

Teams will select their preferred footy side, and that team’s weekend result will compact on the eventual outcome.

“The best score from the two-man team each week – calculated on stableford points – will be that team’s registered score, as long as their footy team wins. If their team loses, then the lowest score will be the one officially recorded,” said Healey.

And, as all golfers are handicapped to create a level playing field on the course, so too will be the respective footy teams. Each week on-line betting agency Centrebet will release line betting on both the AFL and NRL teams, with results dependant on the start given.

As an example Healey instanced a team of two Broncos supporters, whose best scores during the week might have been 40 and 36 stableford points respectively.

“Let’s say the Broncos give the Cowboys 6½ points start in the first NRL round, and win by 10. That means their best score – 40 points – is registered,” he said.

“But if the Cowboys win, or escape with a loss of less than 6½, the recorded score for the team will be the lower 36 points.”

US PGA Touring Professional Steven Bowditch, a former Tewantin Noosa junior and an avid Knights supporter, considered the format so exciting he has decided to become involved, participating in the ‘Bowdo Bonus’.

One team from each code will be drawn randomly each week and they will be awarded the added bonus of Bowditch becoming an additional team member that week. The team has the option of using his best single round score for the PGA tournament he is contesting that same week. Teams can only win the Bowdo Bonus once.

During its introductory start last year, teams of four took part but Healey said that was too cumbersome and the scoring system proved difficult to manage. He believes two-man teams will not only be easier to manage, but will be much more competitive.

“Imagine if one player is consistently returning really good scores and his mate is not pulling his weight. It is Aussie culture that competitive juices will start to flow,” he said.

Team members are permitted to play as many rounds of golf in a week as they desire, as long as they are entered in a recognised club competition. They can also play any course.

“When the two finalists were deiced last year, members of both teams played just about every day of the week leading up to the grand finals in an effort to register their best scores,” said Healy.

While Healy is obviously keen to develop and advance his embryonic game, he believes Fairway Footy will be a fillip for golf clubs.

“If golfers really get in to this I can see it encouraging them to play more rounds a week. It might also entice them to play on those ‘iffy’ days when the weather may not be all that favourable.”

Healey has set a relatively-small target of 100 teams for Fairway Footy during the 2011 season.

“Obviously I’d like to see more, but I’d be happy with 200 players. I know that once golfers get a taste, they will be back for more,” he said.

Details, playing conditions and the all-important registration form can be accessed on www.fairwayfooty.com.au. – TONY DURKIN