The Masters might not be going ahead in its original timeslot but a remarkable LEGO recreation of the famed par 3 shows just how much Augusta National means to some people.

Lou Stagner, a business data analyst who also “dabbles” in golf data analytics on his Twitter page and at DECADE Course Management Systems, shared a video of the creation he and his daughter built which has warmed many a golf fan in the absence of the real-life tournament being played this April.

“My daughter and I built this replica of Augusta National #12 out of Lego. We are planning to sell it to raise money for charity.”

Stagner said he and Abby began the project last December and that it took roughly 60 hours to complete. The dimensions are 80cm wide by 130cm long and 50cm high and it involved more than 20,000 individual LEGO pieces. 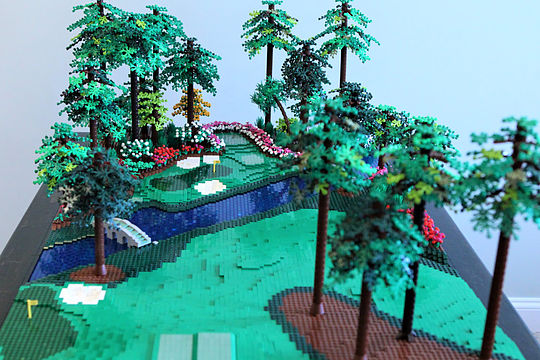 The pair attended to every detail, including trees, bunkers, flower beds and Rae’s Creek. It even includes the 11th green and 13th tee box.

The detail here is staggering, and you cannot even imagine how much time it took for them to not only build it, but also film and edit the entire process into the video which is streaming around the world.

A massive LEGO project is a good way to spend your quarantine hours and this pair have certainly attracted world-wide attention to their project which started on their dining room table and grew from there.