New hole to make a splash at 13th Beach

The official opening of the rebuilt par-three 12th hole on the Creek Course at 13th Beach golf links adjacent to Barwon Heads in Victoria revealed a dreaded future for wayward golfers – a watery grave.

The hole features an enormous 100-metre long billabong down almost the entire left side, tee to green, with some design similarities to the 16th at Augusta. 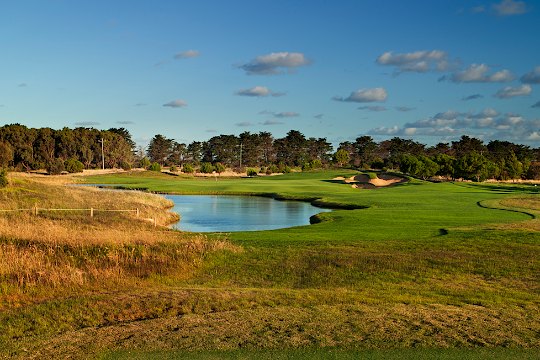 The new 12th hole on the Creek Course at 13th Beach

Any shot even a little left will go in the drink.

The honour of hitting the first three shots went to the club’s inaugural captain, Bill Smurthwaite.

His third turned out to be the best shot of the evening, stopping just over a metre from the hole.

He was followed by his successors as captain, John Bell, Tony Manderson, Frankie MacGowan and Brett Morrissy.

The hole was originally built as a 219-metre par-three, and although challenging, it felt out of character with the rest of the course.

The new hole is shorter, 145m (ladies 115m), has a two-tiered, undulating green and safety mound on the right guarded by a double bunker.

It was re-designed by the course’s architect Tony Cashmore, shaped by renowned course builder Barry Hudson and built by club superintendent Steve Hewitt and his grounds staff.

“It’s going to be a terrific challenge for members and visitors alike but after all, that’s what 13th Beach is all about.”

“World class golf at one of the highest rated golf complexes in Australia and we’re working to make it even better,” said Masters.

“That’s why our membership bucks the national trend and continues to grow.”

Thirteenth Beach will celebrate its 10th birthday in November 2011.