A fire which caused about $200,000 damage to the Port Fairy Golf Club in late May will not inflict major financial or operational disruption, according to the club’s manager.

A shed adjacent to the first tee, which housed 10 of the club’s electric carts and members’ club, was completely destroyed. 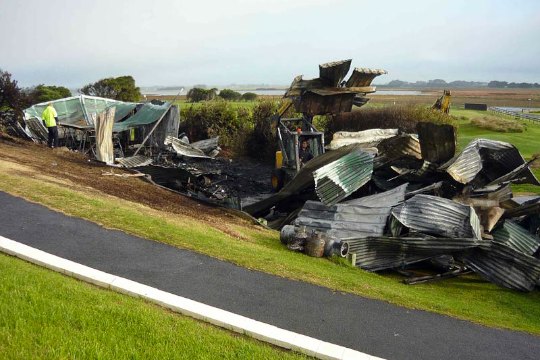 Fire inspectors say the fire was caused by an electrical fault in the cart storage area.

Inspectors say the fire was not suspicious.

Brown said the clubhouse was extremely lucky to escape the fire’s wrath.

“The conditions on the night, it was a very still night and the shed burnt and only minimal damage to the surrounds. If it had been a windy night, the prevailing wind would have been blowing the flames directly at the clubhouse, which was only 10 metres away.”

The course’s irrigation system was disconnected by the fire but Brown said it will be fully covered and will only result in minimal disruption.

“We’re fortunate it’s been a wet summer and autumn and we’ve got a couple of months before we need the irrigation gear,” said Brown.

An insurance assessor’s first estimate of the damage was $230,000 but the club is still working to value the club’s building and contents.

The 10 carts alone were worth $70,000 and will not be replaced until temporary shelter has been found.

“I’m quite confident that it will all be fully covered,” said Brown.

“(Members) have the possibility of insurance claims through their personal contents insurance plus our insurance company.”

The razed shed has caused the club to reassess its facilities.

“Rather than putting the shed immediately back on that site, it’s maybe the opportunity that we need to look at the overview of all the club’s facilities and maybe that’s not the best site for a shed,” said Brown.

The area between the putting green and the 18th green is being considered for future cart storage.

Meanwhile, the club is halfway through a series of design changes to the course itself.

New bunkers have been added to the seventh, 10th and 12th holes and further changes are being overseen by designer Bruce Grant.

Brown said a Scottish burn may be dug across the fairway of the par-five 18th.

The burn would cross the fairway in the lay up area, weave up between the 18th and first fairways, and cross the 18th fairway a second time closer to the green.

The 167 metre par-three fourth may also be lengthened to approximately 210 metres.

The green would be moved back against the sand dunes that are behind and to the right of the current green.

Alterations to the ninth green are also being considered.