If it works for St Andrews then why not Royal Queensland….playing the course backwards, that is!

Put it this way, a reversible course designed by Ogilvy Clayton Cocking Mead (OCCM) is being seriously considered at RQ to use up 30 hectares of vacant land that has sat dormant since 2007 when the club completed a major redesign to accommodate the nearby Gateway Bridge. 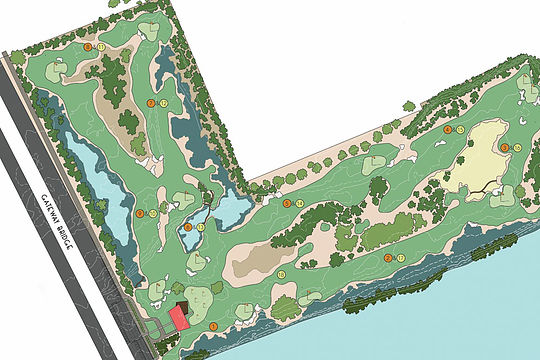 Several concepts have been considered since then including:

Or the most interesting of all the suggestions, adding as reversible course.

Of course the concept of a reversible course originated at St Andrews in Scotland.

At the world’s most famous layout the opening hole in the reverse course plays from the first tee to the Road Hole green at the 17th hole; the second hole from the 18th tee to the 16th green, and the course continues all the way (anti-clockwise) to the finish, where golfers play from the second tee to the 18th green.

Those who have played the course confirm that it includes some remarkable holes.

The RQ club revealed that Tom Simpson, the British architect who built several great courses in Europe, drew his concept of a small reversible course in his book The Architectural Side of Golf.

Simpson summarised the advantages of a reversible course as:

Reducing the impact of divots or pitch marks, and allowing greens keepers to rest areas; spreading traffic wear and compaction; increasing pleasure and variety; allowing the effect of wind on play to differ; favouring a ‘strategic’ type of design, as little (if any) additional bunkering on a strategic course is needed for reverse play

Certainly there is enough land to build a reversible course with no formalised tees and according to the club that would create something unique, varied and fun to play as well as offering 18 quite different holes.