Members at the Royal Canberra Golf Club have had their first opportunity to inspect the proposed course changes to their highly ranked layout, in a Master Plan presented by design company, Ogilvy Clayton.

All 27 holes at the spectacular Westbourne Woods layout are earmarked for amendments, some minor in nature and others – like the par five 4th changing to a long par four – much more significant. 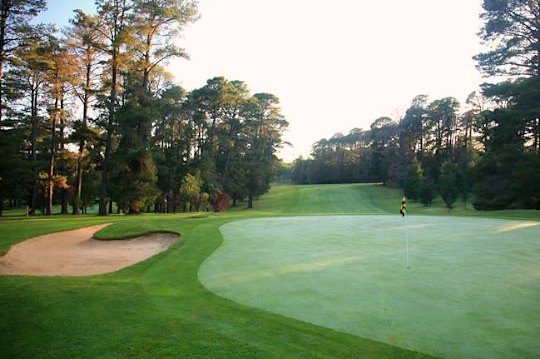 The repositioning of some tees and greens to improve the strategic playability of some holes are a feature of the Master Plan along with a revamp of both fairway and greenside bunkering.

Ogilvy Clayton has also proposed the removal of some trees that have encroached on lines of play but also to improve aeration and alleviate shade issues on a number of holes around the heavily wooded layout.

The golf course’s green complexes, most of which are now 50 years old, are also in line for significant upgrades in the proposals put to members.

Club General Manager, Rick Coate, said feedback from the Board and members has been positive since Ogilvy Clayton was appointed last December, from a short list that included Crafter Mogford, Graham Marsh Design and Greg Norman Golf Course Design.

“We were impressed with the submissions made by them all but since the appointment, we can’t be more pleased with the work Ogilvy Clayton are doing. Their design philosophies and playing strategies are exciting,” Coate said.

“Geoff Ogilvy, Mike Clayton and their team have personally visited the site on a number of occasions, walking all 27 holes of the course and then walking them all backwards, to establish their views on what needs to be done. The Master Plan was presented to members at an information evening in early July.”

Coate added “There are still some elements of the plan for the course to be discussed and confirmed but we’re excited with the proposals and look forward to seeking member approval to commence the work in 2013, following the Women’s Australian Open.”

Royal Canberra will host the 2013 ISPS Handa Women’s Australian Open for the first time in February as part of Centenary celebrations in the national capital.

The LPGA co-sanctioned event will be assured of attracting most of the world’s best players to Canberra, including world number one Yani Tseng, Australia’s Hall of Famer Karrie Webb, along with defending champion Jessica Korda.

“Golf Australia is still negotiating the composition of the final field but we expect many big names to be making the trip,” Coate said, pointing out that the dates in February are also yet to be confirmed.

“With the support the ACT Government, Dr Handa and Golf Australia, the Open is shaping up to be a magnificent spectacle and a highlight of Canberra’s Centenary celebrations.”