St Andrews blanketed in snow by ‘Beast from the East’

Never mind the sand traps, what about the icicles? It’s a sight to behold for the Home of Golf – and most golf links in Scotland and Wales too, for that matter.

The pride of the golfing world, St Andrews, has disappeared under metres of snow. 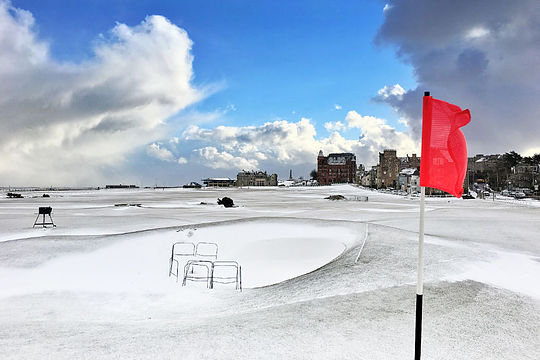 Forget the Swilcan Burn and the Road Hole Bunker, the ‘Beast from the East’ has eaten them for breakfast.

Parts of Scotland have reported receiving up to 120 inches of ‘powder’ during some of the strangest weather to hit Europe in years.

The blizzard has left some of the iconic golf courses of the world virtually unplayable – even though we know most golfers are mad enough to tee it up anyway, if they had the opportunity.

St Andrews Old, The Castle Course, right up through the beautiful Cruden Bay and onwards to Royal Dornoch and even the picturesque seaside links at Nefyn in Wales, few have escaped the wrath of the ‘Beast’, which Europeans have referred to the blizzard to hit their shores.

Luckily the British Open isn’t on this month…even the mighty Carnoustie, this year’s Open venue, was reportedly invisible under this blanket of snow.