The completion and re-opening of holes 13, 14 and 15 marks a new era for the almost-40 year old club and is part of a multi-million dollar overhaul transforming the course into a world-class golfing experience. 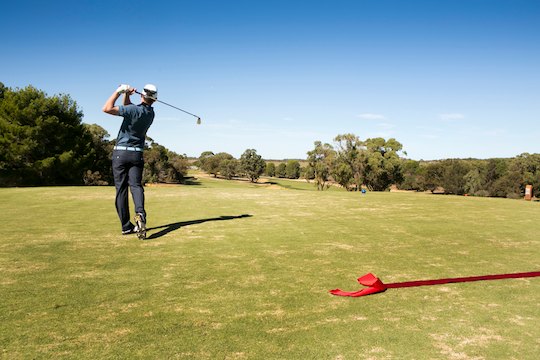 Speaking at the opening ceremony, former golf professional-turned-course designer Mike Clayton of Ogilvy Clayton, the firm working in partnership with Sun City Country Club, said he was personally extremely impressed with the results from the first stage of the redevelopment.

“As someone who has played on hundreds of different courses around the world I can confidently say that the best golf is played over and around hazards on the ground,” he said.

“In the past, much of the game played here at Sun City has been about hazards in the air.

Bringing the focus back to ground level is the single most significant change reflected in the redevelopment of these three new holes and will help to transform the game played here at Yanchep.”

Mr Clayton also made reference to the course’s future potential.

“Land as good as what we have here at Sun City Country Club should make for a course well inside of the top 30 in Australia.”

“In fact, if the redesign of the remaining 15 holes turns out as well as these first three have then I believe this course could become one of the top 15 in the country.”

Mayor Tracey Roberts congratulated both the Club and the course masterplanners, Ogilvy Clayton, saying that “The quality of the new holes and the overarching vision for the Club’s future is testament to the passion of Sun City Country Club members – many of whom live in Yanchep and the surrounding suburbs.

“This is already a great Club – and it is very clear that it can only get better,” she added.

After the Mayor cut a ceremonial ribbon, declaring the new holes open, 22-year-old Brady Watt, one of golf’s rising stars and Yanchep local, hit the first drive on the 13th hole, which overlooks the southern portion of the course, and Peet Limited’s new Yanchep Golf Estate development.

These are the first major works to be undertaken by the Club since it opened in the 1970s.

It followed many years of consultation, planning and fundraising by Sun City Country Club’s management.

With the first of the holes now complete, the focus has now shifted to the second phase of the course redevelopment with work presently underway on the second and eighth holes.

In the lead up to the launch of the redevelopment program, Sun City Country Club established three replacement holes, so that the course would continue to offer players an 18-hole game throughout the works.