Warringah celebrates 75 not out

It’s renowned as one of Sydney’s busiest golf clubs. Yet there are some who regard Warringah Golf Club as one of the friendliest as well.

It’s always had one of the best-stocked pro shops on the northern beaches, had one of the most ‘pro-active’ team of teachers and professionals and an enthusiastic group of members who continually strive to make a mark on the Sydney amateur scene. 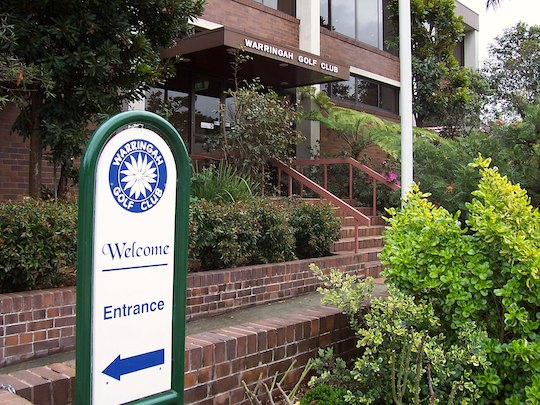 And now the club really has something to celebrate.

This month Warringah Golf Club will turn 75-years-old – yet another momentous occasion for the members and staff.

Warringah Golf Club sits on land leased by the club from Warringah Council.

That is a great result as more than $1 million is spent on maintaining the course each year to ensure it provides an ideal golfing experience for all golfers, from the short handicappers’ right through to the occasional holiday-season social golfers.

Certainly the course is the perfect layout for ‘time precious’ golfers as well with nine holes on each side of Kentwell Road.

Almost 60 per cent of all social golf play on the Warringah course is for nine holes or the increasingly popular ‘twilight golf’ that is available from 2pm in the winter months and 4pm in summer.

Warringah’s professional Rob Richards has been ‘back’ at the club since 2002 after a successful stint at Riverside Oaks.

Robert’s father Bob, who has retired but still does some work in the pro shop, had been the previous pro since 1966.

Both are renowned for their teaching skills.

These days it is Rob who is attuned to the needs of all golfers and provides great service to the club members and social golfers alike with a huge stock of all golf equipment at the best prices in town.

Warringah is a fairly unique club in that their registered club sits across the other side of the busy Condamine Street from the actual layout.

Many of the social golfers who frequent Warringah do not realise that they are welcome to visit the clubhouse and enjoy the club lounge and bar facilities along with a full service TAB either before or after their golf games.

As there is now also a safe option for crossing Kentwell Road (the road that divides the two nines), from late October this year there will be a great addition with a fleet of motorised carts available for hire to those who prefer to use a cart rather than walking the course and those ‘time precious’ golfers.

Yet Warringah is a fairly flat walk and the veterans love it.

Indeed the golf club is proud of its position in the northern beaches community of metropolitan Sydney as wonderful ‘local’ facility for social interaction, exercise and sporting pursuit for club members and the thousands of social golfers who play on the course each year and live in the nearby suburbs of the Manly, Warringah and Pittwater council areas.

And for those interested in a piece of their history, the 75th anniversary is of the actual formation of the golf club following a public meeting in 1936.

Actually Warringah’s proud history dates back to 1935 when the first nine holes (the current area north of Kentwell Road) were opened as the Warringah Golf Course.

The Warringah Golf Club itself was formed following a public meeting in September, 1936.

The formation of the club was enacted based on an initial 36 applications for membership, 19 full-playing members and 17 associates.

Based on the support of public players, the capital was accumulated to fund the clearing of the area south of Kentwell Road to develop the second nine holes, which were opened in 1939.

The first president of the club was Mr G.D. MacNab.

Through the late 1950s significant work was done to raise the level of fairways and establish new tees and greens.

In 1968 a night practice range was established however due to declining patronage this was closed in 1977.

After only two years of the club’s existence, the land where the current clubhouse now stands was purchased and the first clubhouse was built and opened in April, 1939.

After the Second World War, membership increased significantly and a decision was made to extend the clubhouse building with these extensions opening in 1949.

The current clubhouse was built in 1968 and has had renovations and extensions carried out over the years with the last of those completed in 2000.

The club celebrated its 70th anniversary in 2006 with a series of events in the September of that year.

One of the first junior female members was Janette Bonner (nee Saillard), who still has an association with the club as her husband Jack Bonner is still an active playing member.

In recent years the golf club has experienced several challenges, including the possible loss of a portion of the golf course to be the site of the new northern beaches hospital.

Fortunately, this did not eventuate.

The golf club and course continues to be one of the most popular courses for social golfers in metropolitan Sydney with about 45,000 rounds played a year, along with 22,000 rounds of members competitions played each year.