Wollongong gears up for redesign launch

One of Australia’s oldest clubs, the Wollongong Golf Club, is gearing up for the opening of several new holes following redesign work completed over the summer months.

The project represents Stage Two of work completed in accordance with a Master Plan, created by noted course designer Ross Watson, at the course which abuts the dunes and ocean frontage of the Tasman Sea and has hosted the likes of major champions Gene Sarazen, Gary Player, Bobby Locke and Steve Elkington in the years since the club’s inception in 1897. 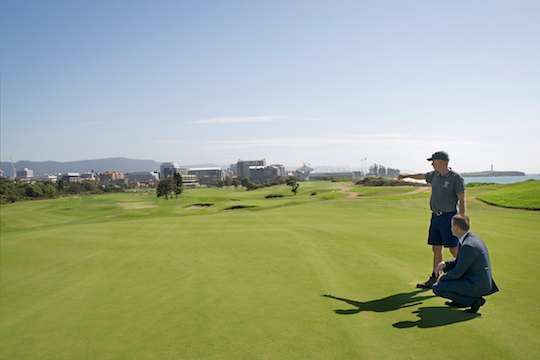 Wollongong Golf Club General Manager, Leigh Hingston, said the scheduled opening day of Sunday 13th April is being eagerly anticipated by both the membership and the golfing public of the Illawarra region.

“We’ve been looking forward with excitement to the day where we could announce ‘We’re open!’ and I think everyone will agree it’s been worth the wait.” he said.

“For many months now, our members and guests have watched the new holes evolve and the new bent greens and couch fairways mature. It’s fair to say the excitement has been building and everyone is itching to get out there.”

The key features of the work are an extension of the opening par-five where a new undulating green has been created at an elevated site beyond and to the left of the original location.

The uphill par-four 7th has had the existing green complex set atop a dune redesigned with new bunkering added; and the adjacent short par-three 17th – one of the most iconic holes on the layout– has a new green, re-shaped bunkers and new chipping areas introduced while retaining the same exciting shot values from the tee perched high above.

Finally, teeing areas at the par-five 18th have been extended and new fairway bunkers added, immediately transforming the hole into a more strategic and challenging proposition.

The finishing touches to the project include the replacement of non-indigenous plants and flora with species local to the area, in accordance with the club’s Vegetation Management Plan.

“The routing of the holes that Ross Watson achieved in the Master Plan was very clever and we’ve been faithful to those design elements in this stage of the project.

Course superintendent Jake Gibbs and his staff have been fantastic and the membership as a whole have been so supportive.”

“We’re really excited to be able to enhance this unique property where the natural sand dunes and beach front actually come into play on many of the holes.” Hingston noted.

“The proximity to the beach, city and the fantastic views along the coast with the mountain backdrop; we think it’s one of the unique golfing experiences in NSW.”