As Jack Newton himself will gladly attest to, there are some great “kids” coming through the ranks of his junior golf foundation.

Yet once a year those youngsters like to play grown-ups – big time. 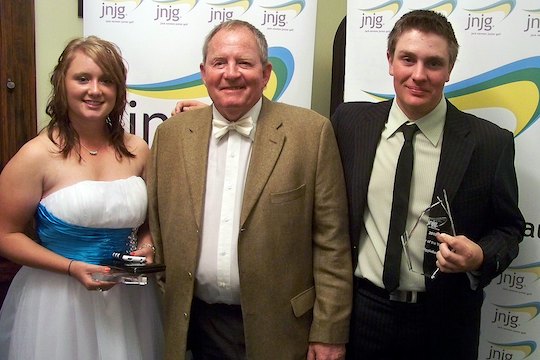 They dress up in their finest attire for one of their most keenly-anticipated nights of the year – the annual Jack Newton Junior Golf sponsors and presentation day.

Hosted each year by Concord Golf Club, this day is put on to reward JNJG’s valuable supporters and sponsors with a friendly game of golf.

That turns into a great night which gives Jack and his right-hand man Peter van Wegen the opportunity to identify and reward those talented juniors who have performed well throughout the year.

The major awards for the night in 2010 were the Junior and Sub Junior Boy and Girl of the Year.

The sub junior boy of the year was won by Kurt Eckmann from Castle Hill Country Club. Kurt had an extremely successful year winning the State Junior Medals, State Junior Match Play as well as finishing runner-up at the Subaru State Age Championships in the boys 14 years age group.

In the girls’ event Lizzy Elmassian (Concord GC) was a level above the rest of the girls in her age group.

Lizzy won the girls 14 years title at the Subaru State Age Championship, was a member of the NSW Junior State Squad and also the winner of the Sub Junior Jean Derrin trophy award for the lowest scoring average of any player Under 15 years of age as at June 30.

There were a number of top performers vying to be crowned the 2010 Junior Boy of the Year.

Yet it was almost impossible to look past Jake Higginbottom of The Australian Golf Club who had a simply phenomenal year which included representing NSW at both Junior and Senior levels, representing Australia at a junior level at the Toyota World Junior and at a senior level in the prestigious Asian Amateur.

Jake also won the Aaron Baddeley National Championships, the Victorian Junior and capped it off by becoming the youngest player for several decades to win the NSW Amateur.

The Junior Girl of the year for 2010 was taken out be Carly Beck from The Australian Golf Club.

Carly really hit her strides this year and won the Harvey Norman Week of Golf and the Subaru State Age Championships.

And just to cap off her win, Carly was also a member of the NSW Junior and Senior State teams.

The final list of major winners were at the 2010 Jack Newton Presentation Night Awards were: