Augusta treat for club pro of the year

Recently recognised Queensland PGA club pro of the year, John Mellish, would like to regard his recent trip to the US Masters as a reward and recognition for a quarter of a century of dedication to his job.

But the Beerwah Golf Club professional conceded before he departed for Augusta that had the jaunt – with three golfing mates – not been booked and paid for months ago, he would not have been there. 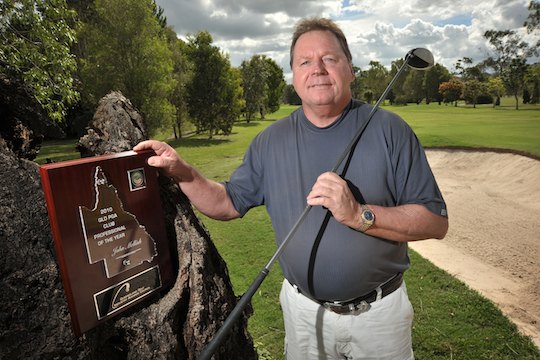 “With the Christmas we have had I’m lucky my cat Sparkles is still being fed,” he said, recalling one of the wettest Sunshine Coast summers on record.

“It would have been nice to reflect on my trip and regard it as a reward for me winning the award, but it is certainly not that. It was an indulgence and will mean some more hard work when it arrive back.”

“But I suppose I can always consider it part of the bonus of winning.”

The club pro of the year award is designed to recognise the effort, dedication and contribution of club professionals to their club, members, and programs and events for professional and amateur golfers alike. Selection criteria included services and benefits to club members, initiative in running events and programs, and business initiative.

Mellish regards the club pro of the year award as something very special, even though he admits it had not been something he had taken too seriously in the past.

“On reflection it is a worthy recognition for the rank-and-file golf professionals who work in the industry seven days a week, rain, hail or shine,” he said.

“In my case it was a nice reward after 25 years service, and it was encouraging knowing that after all that time the club still considered I was worthy, and nominated me.”

Mellish reckons he might see out his working life at Beerwah, a club that currently boasts just on 900 members but averages around 120 players each day. He has another seven years to run on his current contract, which has a five-year option.

And he says that while the recent spate of wet weather had wreaked havoc on his bank balance and the current economic climate meant golf had become a somewhat expensive leisure pursuit, things were much improved on when he first arrived at Beerwah a quarter of a century ago.

“In my first three days in the pro shop I never sold a thing,” he recalled.

“I came here from Royal Sydney, so it was something of a culture shock. My first sale was actually a pull buggy, and even getting that deal done was tough work.

“Back then the course was in its infancy, and was only nine holes. Now, when it is in top condition, I rate it among the best-presented non-resort courses on the Sunshine Coast.”

While Mellish acknowledges he is passionate about golf, he admits to being a fanatical Manly Sea Eagles rugby league fan.

“Nothing beats being a Manly fan,” he says, revealing that the ‘shrine’ he erected in his pro shop when the Sea Eagles won the NRL premiership in 2008 was about to come to life again.

“They may have started slowly, but I have a feeling we might fly high again in 2011.”

“The shrine was just majestic. People would come in to the shop, frustrated after a bad round, and I would encourage them to kneel in front of the shrine. After a few minutes of ‘meditation’ they would rise with a new and positive outlook on everything.”

“That is the power of the Sea Eagles.”

And although he was looking forward to this third trip to the Masters and golf games at such courses as Riveira, Trump National, TPC San Antonio, The Pinnacle and The Monument in Phoenix and Las Vegas Country Club, the highlight of his trip to the US was seeing Celine Dion in concert at Caesar’s Palace.

“Celine Dion, Cheryl Ladd and Danny De Vito would be my ideal golfing partners. The reason I’d have Danny along is for him to make me look good in front of the two girls,” he joked.