Brad James has a job many want, but few can do. 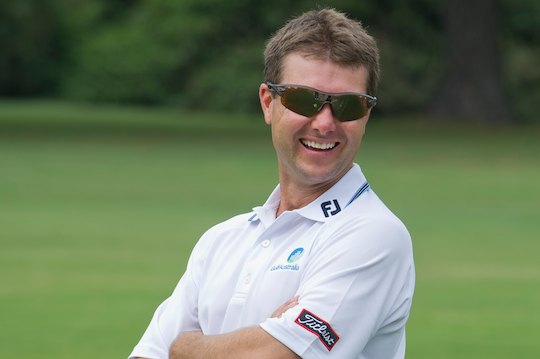 Responsible for creating, implementing and co-ordinating the best possible coaching, support service, training environment and competition opportunities for our golfing best, James appreciates that his role is vital towards improving the standing of our elite golfers on the international stage.

Currently there is no Australian male amateur golfer inside the official R&A World Ranking top-10. Six Americans, two Asians, a South African and a European makeup the top-order. At just four, our numbers inside the top-50 are the lowest in years.

A single Aussie female is in the world top-10 and four others inside the top-50.

Disturbing statistics given the status we have enjoyed in the past and the quality of rookie professionals we have produced who later go on to make their presence felt in the game worldwide.

James’ goal is to change this, but he sends a stern message to any critics who think the results will happen overnight.

“This is a long term vision representing a long term investment. We want to build players who’ll be better for the long term development of the game so we can produce more Greg Norman’s, Jason Day’s and Karrie Webb’s.”

Traditionally, Australian golfers have punched above their weight on the international stage. Australia also has one of the highest numbers of golf courses per capita in the world.

As a nation we have produced more international standard golfers per head of population than the USA, UK, Japan and many other internationally competitive countries.

Yet the tide began to change over the last five years where we have been overtaken by nations who have invested heavily in talent identification and development programs.

This is where James comes into play.

“Australia has always had strong development programs,” says James, who prior to taking his position with Golf Australia was Director of Golf at the University of Minnesota taking the Gophers to three Big 10 titles, including winning the NCAA Championship in 2002, making Minnesota the first northern team in twenty-three years to capture the national title.

“When I arrived back in Australia from the US, the first key change I implemented was to co-ordinate all the programs and open communication between the state associations, their coaches, their players and the key stakeholders.”

As with the introduction of any changes there is often resistance, yet James continues to push the broader long term focus agenda with the States elite programs and their stakeholders.

A high performance program within Australia has operated in one capacity or the other since 1984, which included the running of various state training camps to full Australian Institute of Sport status in 1992.

With the AIS program decentralised and State initiatives on the upswing, James faces the challenge of ensuring everyone is singing to the same song sheet.

“The earlier culture lacked integration and co-ordination towards developing the player for the longer term,” says James.

“There was too much emphasis on short term results, as opposed to looking down the path towards producing quality players who would perform for many years on the main tours.”

James doesn’t mince his words when it comes to keeping the focus on implementing a co-ordinated program towards a long-term holistic direction to better prepare Australia’s elite golfers for amateur and professional events.

“At times in the past we may have over protected our athletes,” says James.

“This resulted in some of them not being fully prepared at the pointy end for elite professional golf. The attrition rate with some was particularly disappointing. This is why we are developing a process to get to our athletes earlier and to be there should they progress to the elite level.”

The direction of the National Program now sees development beginning at a much younger age to ensure Australian players are better exposed to the skills and resources, to not only be a professional golfer, but to have success at the national and international professional level.

“We are trying to start the development process when players are between 13 to 16-years-old,” says James.

“If we source and nurture our younger talent pool at that age, by the time they are professional they will be much better prepared. We aim at getting the younger player used to life on tour with drafting speeches, encouraging proper food and eating habits, and giving assistance in dealing with the rigours of travel.”

“I meet with the players regularly and we are in constant communication with coaches each day,” says James.

“This is a key aspect that is different to how we operated under the Australian Institute of Sport. The National Development program needs to be owned by all the stakeholders involved. We need and are working as a centralised team.”

According to James, the integration with the state high performance agencies has progressed well and they are working towards establishing appropriate benchmarks and the processes of achieving long term development.

“Success at the highest level will help the growth of the game,” says James.

“Sponsorship opportunities will grow, player development will improve and that will foster a ‘give back’ culture. These key objectives will be better served through the long term success of our athletes.”

James chooses his words carefully and he needs to. The role he holds involves considerable diplomacy when interacting with the State agencies.

“Golf Australia and the Australian Sports Commission put tremendous amounts of resources and funding into the development of elite athletes. If we feel they are heading down the path, we will not support that process.”

James has set the benchmarks high and it has been purposely done that way. He is intimately accountable for overseeing the success of the National program.

“We are dealing with many factors. We want to grow the game and my area of high performance is vital towards ensuring as a nation we continue to produce, in the longer term, quality golfers. Unfortunately, only 1-2% go on to that elite professional level.”