Brisbane-based Mick McLoughlin has set his sights on breaking a decade-old world record. 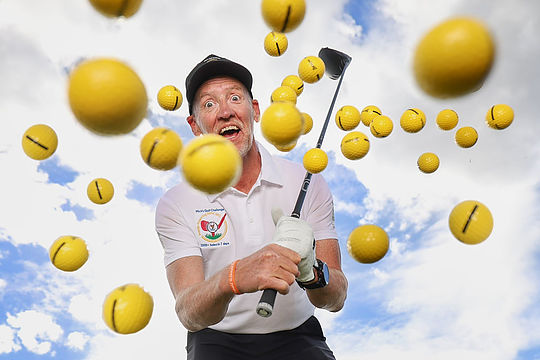 58-year-old McLoughlin wants to go one better playing 2001 golf holes in seven days (cart-assisted) meaning he needs to get through 286 holes or the equivalent of 16 rounds of golf per day!

While that may sound crazy, it’s all for a good cause – Ronald McDonald House Charities.

“The world title is one challenge, raising $250,000 for RMHC SEQ is the other. They go together, and I’m calling on Queensland businesses and individuals who can, to dig deep and come on board.”

“Supporters can donate as little or as much, or they can bid to come out on the course during the challenge, buy a ball and more,” said McLoughlin, who has served as a RMHC SEQ Board Member for a number of years.

So what does it take to prepare your body for that sort of torture?

Well, McLoughlin began training for the world record attempt in December 2020 and is now hitting 1,000 balls a day at Golf Central in Brisbane’s east, who are helping to support him in his record-breaking quest. He also works with a golf coach and personal trainer.

While Bonnelli isn’t keen to see his record broken, he’s supportive of the attempt given all of the proceeds go to charity.

“I called the current record holder Geno Bonnelli and he said, ‘while I don’t want to lose my world record title, if I have to, then I want to lose it to you in raising funds for Ronald McDonald House,’ which made me even more determined.”

Following close to 12 months of preparation, McLoughlin will hit the fairways from November 21 to 27 later this year.

To find out more visit www.micksgolfchallenge.org.au