Brisbane Broncos halfback Peter Wallace is the early leader in the celebrity Nike Golf Speed Trials, but despite his competitive nature he holds no fears of standing atop the championship podium later in the year.

To coincide with the release of their VR_S range, Nike Golf has scheduled 100 speed trials throughout Australia from June through to August. 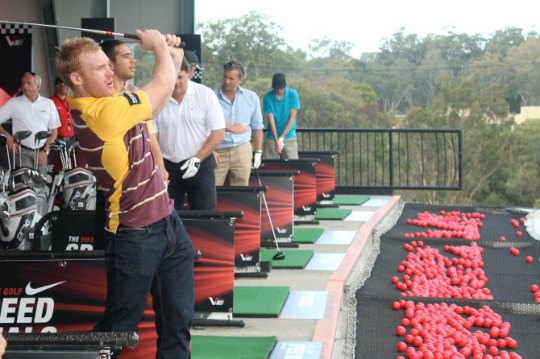 The longest drive from each trial is registered on a national leaderboard with the overall winner earning a trip to Singapore in September to attend the F1 Grand Prix.

And in conjunction, events for celebrities have been integrated. The Broncos halfback was crowned celebrity VR_S King of Speed at the Nike Golf speed trials held recently at Brisbane’s Victoria Park Golf Complex.

Further events for celebrities are to be held in Sydney, Melbourne and Perth and with an array of luminaries with great golfing prowess to be invited, Wallace has no doubt his early mark will be bettered.

“The Brisbane trials were the first held, so with blokes of the calibre of Ricky Ponting still to take part I doubt I will be overall King of Speed. But it was great fun, and I surprised myself how far I hit the ball with the new driver,” he said.

The Nike range, headlined by the stylish new driver, is being marketed as ultra-fast and distance-generating. And as one of 130 to take part in the Victoria Park speed trials, Wallace agrees.

“It was lighter and longer than other drivers I have used, and the club head speed generated was incredible. The ball certainly went further, and I was hitting it higher as well,” he said.

During the Speed Trials Challenge participants were permitted three drives with the VR_S driver, with their longest drives recorded on a national leader board.

The overall winner from the 100 speed trials to be conducted nationally wins a trip for two to the F1 Singapore Grand Prix in September.

Speed Trials will be held at key retailers including, Golf World, Golf Mart, House of Golf, Power Golf and, in Western Australia, Golf Box. Further information is available at www.speedtrials.com.au